New Zealand and Australia have sent planes to assess the damage from a huge undersea volcanic eruption and tsunami that hit the Pacific nation of Tonga on Saturday.

The eruption sent a thick blanket of ash into the sky, contaminating water supplies, cutting off communications and initially preventing surveillance flights assessing the extent of damage.

But on Monday, flights from New Zealand and Australia were finally able to depart.

Videos shared on social media after Saturday night’s eruption showed people running for higher ground as the metre-high floods hit coastal areas and made their way inland while the sky darkened with ash. A sonic boom could be heard as far away as Alaska.

There were still no official reports of injuries or deaths by Sunday evening, with communications limited.

However, a UK woman is missing after being swept away on Saturday. Angela Glover, 50, who had lived in Tonga since around 2015 and ran a tattoo parlour in the capital of Nuku’alofa with her husband James, was swept away from the beach by the tsunami.

“Angela and her husband, James, got washed away,” her brother Nick Eleini told the Guardian. “James was able to cling on to a tree for quite a long time, but Angela was unable to do so.”

A search has been underway for Glover since she went missing, but Eleini had grave fears for his sister. “What are we, 48 hours later? I don’t think this is going to have a happy ending.”

Families outside Tonga were waiting desperately for news, as communications remained down across most of the country, nearly 48 hours since the huge undersea volcano eruption, which could be heard and felt more than 2,000km away.

Tonga’s cabinet held a crisis meeting on Sunday and was asking for assistance, said the office of Zed Seselja, Australia’s minister for the Pacific.

A surveillance flight departed Australia for Tonga on Monday morning to assess damage to critical infrastructure such as roads, ports and powerlines and determine the next phase of the response effort. It was delayed due to the ash cloud blanketing Tonga but eventually took off.

A Royal New Zealand Air Force Orion plane also managed to depart from Auckland on Monday to assess initial damage in the area.

In a video posted on Facebook, Nightingale Filihia said she was sheltering at her family’s home as volcanic ash and tiny pieces of rock rained down and turned the sky pitch black.

“It’s really bad. They told us to stay indoors and cover our doors and windows because it’s dangerous,” she said. “I felt sorry for the people. Everyone just froze when the explosion happened. We rushed home.”

Outside the house, people were seen carrying umbrellas for protection. 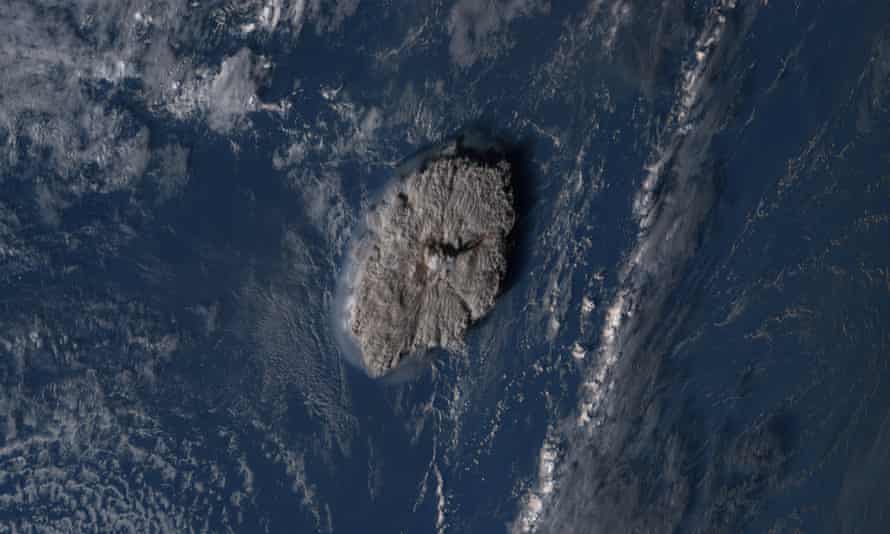 A tweet on Sunday morning stated that the Tongan prime minister, Siaosi Sovaleni, said the tsunami warning remained in place and much of the country had sustained serious damage.

Jacinda Ardern, the prime minister of New Zealand, told a news conference on Sunday that contact had not been established with coastal areas beyond the capital, Nuku‘alofa.

“Nuku‘alofa is covered in thick plumes of volcanic dust but otherwise conditions are calm and stable,” Ardern said. “We have not yet received news from other coastal areas.”

She said the main undersea communications cable was affected, probably due to loss of power. She added that power was being restored in some areas on the islands and local mobile phones were slowly starting to work. The New Zealand high commission in Nuku’alofa said the tsunami had damaged boats, shops and other infrastructure.

The International Federation of the Red Cross expressed concerns about Tonga being “cut off from the rest of the world”.

“From what little updates we have, the scale of the devastation could be immense, especially for outer lying islands,” said Katie Greenwood, IFRC’s Pacific Head of Delegation.

The IFRC was particularly concerned about access to safe and clean drinking water as a result of saltwater inundation caused by the tsunami waves and ash fall from the volcanic eruption, as well as shelter for communities, particularly on the coastline.

Dave Snider, the tsunami warning coordinator for the National Tsunami Warning Center in Palmer, Alaska, said it was very unusual for a volcanic eruption to affect an entire ocean basin, and the spectacle was both “humbling and scary”.

The tsunami waves caused damage to boats as far away as New Zealand and Santa Cruz, California, but did not appear to cause any widespread damage. Snider said he anticipated the tsunami situation in the US and elsewhere to continue improving. 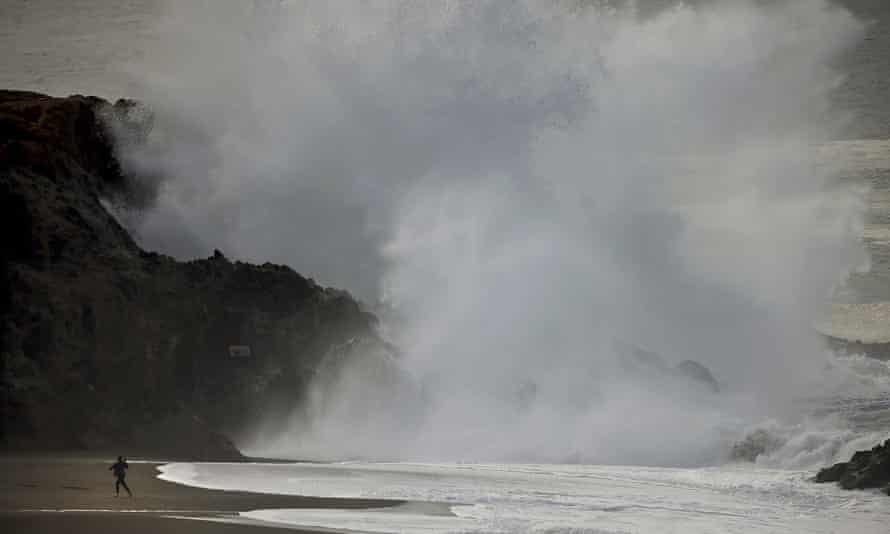 Tsunami advisories were issued earlier for Japan, Hawaii, Alaska and the US Pacific coast. The US Geological Survey estimated the eruption caused the equivalent of a magnitude 5.8 earthquake. Scientists said tsunamis generated by volcanoes rather than earthquakes were relatively rare.

As the tsunami struck on Saturday, a video shot from the roof of a building on the coast showed large waves breaching the coastal wall seconds apart, while a video shot from the New Zealand high commission in Nuku’alofa, where people ran for shelter, showed the downtown area of Patangata had been completely submerged, including the Royal Palace and Tonga’s largest bank.

Another video, shot inside a church, showed children crying out as water surrounded the building and waves began lapping against the windows. In a video posted to YouTube after the eruption, Abraham Leilua begins by telling his followers that “it’s not that bad” but within minutes, as the water rises, he says “I have to run for my life”

Southern Cross Cable Network said on Sunday it had been able to confirm contact with a communications centre in Tonga and work was under way to have internet and phone links restored.

Ardern said the situation in Tonga was “hugely concerning”and New Zealand has made an initial NZ$500,000 (£249,000) available to Tonga

The US secretary of state, Antony Blinken, said he was “deeply concerned” about the people of Tonga and that the US stood prepared to provide support.

The volcano, Hunga Tonga-Hunga Ha‘apai, at 1,800 metres high and 20km (12.5 miles) wide, is 65km (40 miles) north of Nuku‘alofa. US Storm Watch said the eruption was one of the most violent ever captured on satellite, while Tonga’s geological service said the gas, smoke and ash from the eruption reached 20km into the sky.

In Japan, about 230,000 people were advised to evacuate across eight prefectures as waves of more than a metre hit coastal areas, the public broadcaster NHK reported. The alert included areas hit by the deadly 2011 tsunami.