It happened overnight. Larry Ryerson, 78, woke up on a Sunday morning in late June in Medford, southern Oregon, to find thousands of seedlings on his 10-acre Christmas tree farm dying.Their bright green coloring had drained away after a day of triple digit temperatures. And over the next two days, as temperatures climbed as high as 115F, Ryerson watched the young trees, many just over a foot tall, turn brown and die.“It just kind of breaks your heart that you go out there and one day they’re nice fresh-looking trees, and the next day, they’re wilted and turning colors,” said Ryerson, who co-owns U Cut Christmas Tree Farm with his sister. “And there’s nothing you can do about it.”Ryerson estimated that he lost 4,500 trees and was only able to keep his u-cut open for three days this year because of the lack of inventory. His business, which has been around for almost four decades, typically opens around Thanksgiving and continues to sell all the way through Christmas Day.

“I just feel so sorry that a lot of people come up here year after year to get their own tree and we’re one of the few tree farms left in the valley,” he said.

Ryerson isn’t alone. Christmas tree farms across Oregon, the nation’s largest producer, have found themselves in a precarious position after a year of extreme weather.

A deadly “heat dome” pummeled the Pacific northwest beginning in late June, shattering heat records in Oregon and the surrounding area, and a drought engulfed the state for months. The heat and drought are estimated to have wiped out millions of trees across the state, most of them seedlings, leaving farmers to navigate the fallout of what several described as the worst summer in memory.

Some, like Ryerson’s farm, saw huge swaths of their crops destroyed, while others were left with rows and rows of trees with entire sides scalded or new growth withered.

And with the changing climate, this will not be the last year of extreme weather. Now, some Christmas tree farmers across the state have started taking steps to prepare for a future in which the climate may be much less hospitable to their industry. 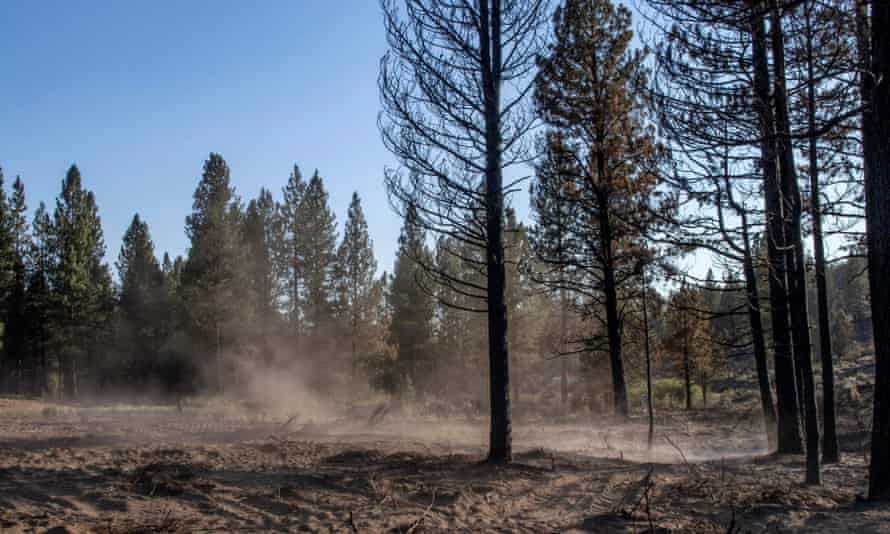 Tom Norby, the president of the Oregon Christmas Tree Growers Association and owner of the Trout Creek Tree Farm, says such changes could include planting cover crops, or experimenting with growing types of trees more resistant to the heating climate.

Norby’s own farm had minimal loss this past year, which he attributed to planting grass between each of his trees, which helped to keep moisture in the soil and block heat from radiating up to the trees. But some changes may have to be more dramatic, such as planting months earlier, or even relocating farms farther north.

This past summer, it was the timing of the heatwave that made it especially lethal. It struck early in the summer, mere months after seedlings were planted and right in the middle of the crop’s peak growth period.

At the same time, prolonged dry periods, which have become increasingly common in the region, were already making seedling survival a challenge (Christmas tree farms typically don’t irrigate, due to their location and the fact that the trees normally haven’t needed it). 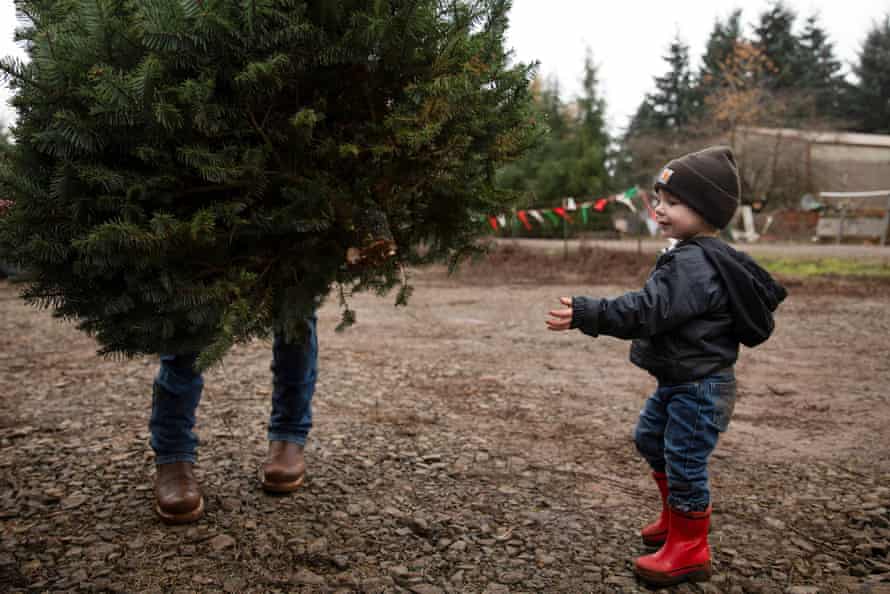 Ryan Swader of Salem loads a Christmas tree after picking it out, next to his son Waylon at Tucker Tree Farm in Salem, Oregon. Photograph: Alisha Jucevic/Reuters

Dana Furrow, co-owner of Furrow Farm in Hillsboro, Oregon, which includes an 80-acre Christmas tree farm, said when the temperatures pushed well past 100F in June, they had only planted their seedlings weeks before, when the climate was already dry. By the time the heatwave hit, her crops were in the midst of early growth – a very sensitive period.

The result was the farm lost thousands of seedlings, along with virtually all of its harvestable, u-cut Noble fir trees.

“It definitely hurts because you’ve already put the cost of the seedlings, the labor, the time, working the fields. I mean it’s a lot,” she said. “Christmas trees are a very labor-intensive crop. So, you lose all of that and you don’t get that back.”

Noble Mountain Tree Farm, a wholesale grower in Salem with about 4,000 acres and more than half a million trees in sales every year, lost about 280,000 seedlings, according to Bob Schaefer, its general manager. At the same time, more than a quarter of its primary species, Noble fir trees, were rendered unsalable this year.

He said that they’re looking at having to do a lot of replanting and additional fertilizing in an effort to help the new trees catch up to the other seedlings. For this season, they’ve had to give their retailers the option of either receiving fewer trees or taking other species. 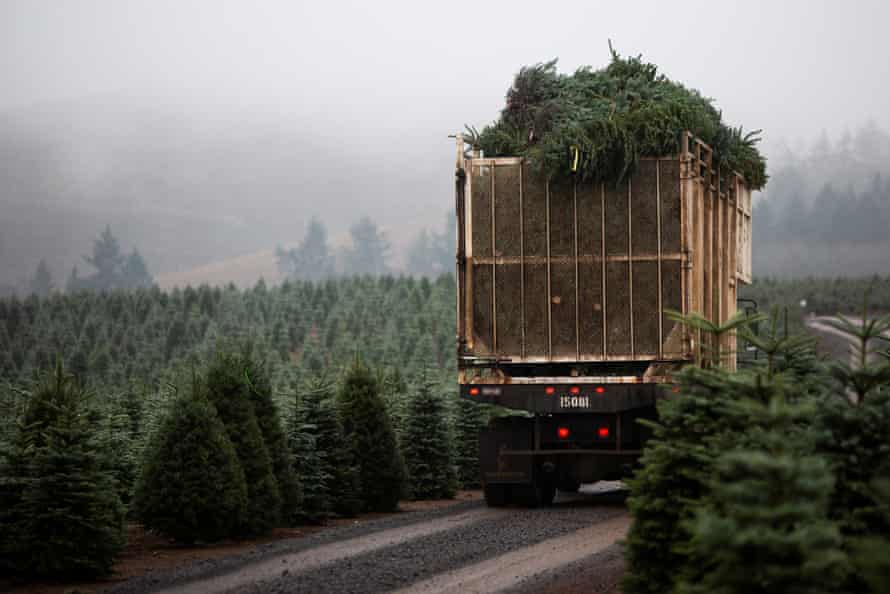 Full damage could ‘take years’ to be felt

Overall, the impact on consumers has been fairly minor. Some businesses have priced their trees slightly higher, while others haven’t been able to offer the variety of species they have in years past.

Norby estimated that inventory was down by 5% to 10% across the state, but clarified that there was no Christmas tree shortage.

“You want a Christmas tree, they’re out there,” he said. “But, you know, here’s the thing, we should be embracing Christmas tree growers. And what you might get is a slightly damaged tree, you know, a tree that’s expressing some of the signs of this global warming event.”

The real impact might not be felt for years to come, according to Chal Landgren, Oregon State University Extension Christmas tree specialist. He cited the fact that most of the damage was on seedlings (Christmas trees take six to 10 years to mature).

“We’re going to just have to watch, you know, we’ll know when that date gets closer. But there’s gonna be this kind of gap from the damage from this year, in eight years,” he said.

Ryerson has already started to make changes to his farm in Medford, after the heatwave. In October, they planted a fresh batch of seedlings – months earlier than normal – in hopes that the rain would help their root systems. He has also started looking around for additional nutrients that might help to protect his crops.

But after this year’s devastation and watching his house and some of his trees burn down in 2019, those changes may simply not be enough.

“If I have another year like this year, I probably have to go out of business,” he said, “just because you work so hard to get them grown and all of a sudden they die – well, what’s the point?”