Taliban governor of Helmand’s message to west: ‘Come back with money, not guns’

Helmand’s new Taliban governor, who spent years as a commander fighting the British in Sangin, welcomes visitors with an assault rifle lying on his desk. Yet he insists the time for fighting is over.

He has a message for the British, and the rest of Nato: recognise the Taliban as Afghanistan’s legitimate leaders and then come back, but with money not guns.

“We faced each other in battle, we didn’t get to know each other in normal times,” said Talib Mawlawi, a Helmand native who fought for the Taliban the first time the group controlled Afghanistan. “Now you can win our hearts and make us happy if you recognise this government.”

Now that the Taliban have taken control of Lashkar Gar, the capital of Helmand, the fighting has stopped for the first time in two decades. The vast majority of the 457 British soldiers who died in the long war perished here in this province, while fighting to keep the Taliban at bay.

Like most of Afghanistan, though, Helmand is hovering on the brink of economic collapse. And like Taliban officials all over the country, its governor is calling on foreign governments to help make up the gap.

“All those foreign countries invaded and killed our women and our children and our old people, and destroyed everything,” he said. Now the international community should help us with humanitarian aid and focus on developing education, business and trade.” 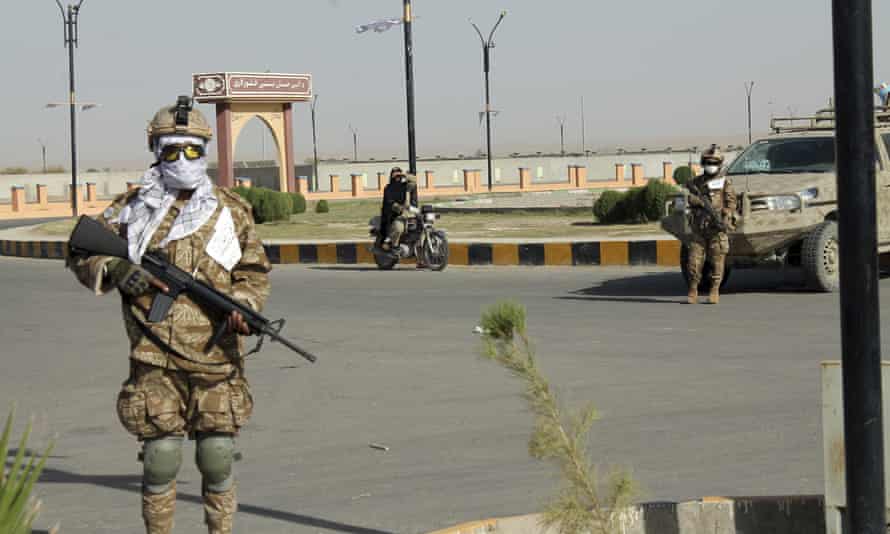 The extraordinary appeal, from a man who was once arch-nemesis of British troops in the province, signals the extent to which the landscape has shifted since the withdrawal of foreign troops, and now that the group faces the task of leading the war-torn country.

Government salaries haven’t been paid for several weeks – straddling the last month of the old rule and the first month of the new. Many people who worked for foreign NGOs have fled or their projects have halted, restaurants are half empty and business at shops is slow.

One big question hanging over the prospect of foreign aid is whether women will be able to work and study. Before the Taliban seized all of Afghanistan, the signs from the parts of Helmand they already controlled, like Sangin, were bleak, with no education for girls at all.

But with a leadership either changed or attuned to international opinion and the cost of denying all girls an education, primary schools nationwide have been ordered to reopen their gates. Lashkar Gah seems to be no exception; girls were at their desks in one school visited unannounced by the Guardian.

Higher education too will reopen to women, although segregated by gender and with a harsher dress code. “The government recommended them not to come as free as they were before, they should wear burqa or Arabic hijab.”

Less clear is whether high schools would reopen for girls, or women working outside healthcare and education could return to their jobs. Mawlawi said he would follow the central government on these issues. “The ministries are still having meetings for that, not completed yet; whatever they announce we will do.”

He has spent most of the last 20 years fighting for control of Helmand. In that period the Taliban have been accused of targeting civilians, including one of Helmand’s leading journalists, Elyas Dayee, killed by a bomb blast last autumn.

The Taliban denied that attack, but Mawlawi admitted that a few months ago, before he moved into the comfortable USAid-funded headquarters in Lashkar Gah, a meeting with a British journalist would have gone very differently.

“I was a commander in Sangin, when we were fighting against the British,” he said. “We were fighting them from just two kilometres away, all the people in the district were helping us. They were not interested in the British being there,” he said. After Sangin fell under Taliban control, he moved on to fight in Musa Qala.

He insists that now people can rebuild in peace, people will be able to earn a living. “There has been 20 years of fighting so it will take some time to get back to normal.”

The security is welcomed by the people of Lashkar Gah after intense fighting in the provincial capital that destroyed many homes. But people are worried about the economy, and about whether the Taliban will try to bring back their ruthless control of people’s lives

Samiullah, 26, runs a shop in the women’s bazaar, selling jewellery and decorations. “My first question of the British, please recognise our government and give us economic help.”

He welcomes the security “everyone in this city has given someone, no family has escaped”, he said, but has also heard the stories about the Taliban’s previous rule, including their controls on everything from beard length to bans on card games. “I hope they won’t interfere in our personal lives.”

Parts of the economy were also left precarious with the government collapse. People with links to the British and to NGOs – often those who had money to spend – fled the country.

Khatera, who has four children, was widowed when her soldier husband was killed fighting earlier this year. She started doing housework and washing for some of the city’s wealthier families to earn a living, but most of her former employers have now fled.

The small benefits she got as a military widow have also stopped. With no money to pay rent, and no relatives to take her in, the family are sleeping in the bazaar.

“I have no problem with the Taliban, my children need to eat. The last government was recognised by the whole world, now they need to recognise this one so that they can help us.”

It is the same message that Mawlawi wants to leave. “Our last message for all the Nato countries is: we helped them. They should be thankful we gave them a chance to leave peacefully, we could have stopped them so they couldn’t leave without a fight. And they should recognise our government.”