Pre-dawn explosions have been heard in Kyiv, as Russia and Ukraine were due to meet again for talks aimed at ending the 20-day war.

A series of Russian strikes hit a residential neighbourhood in the capital on Tuesday, igniting a huge fire and prompting a frantic rescue effort in a 15-storey apartment building. At least one person was killed and others remain trapped inside.

Shockwaves from an explosion also damaged the entry to a metro station that has been used as a bomb shelter. City authorities tweeted an image of the blown-out facade, saying trains would no longer stop at the station.

Flames shot out of the apartment building in the Svyatoshynskyi district of western Kyiv, adjacent to the suburb of Irpin, scene of some of the worst battles of the war, as firefighters climbed ladders to rescue people. A firefighter at the scene confirmed one person had died and that several had been rescued, but others remained inside as rescuers tried to reach them. 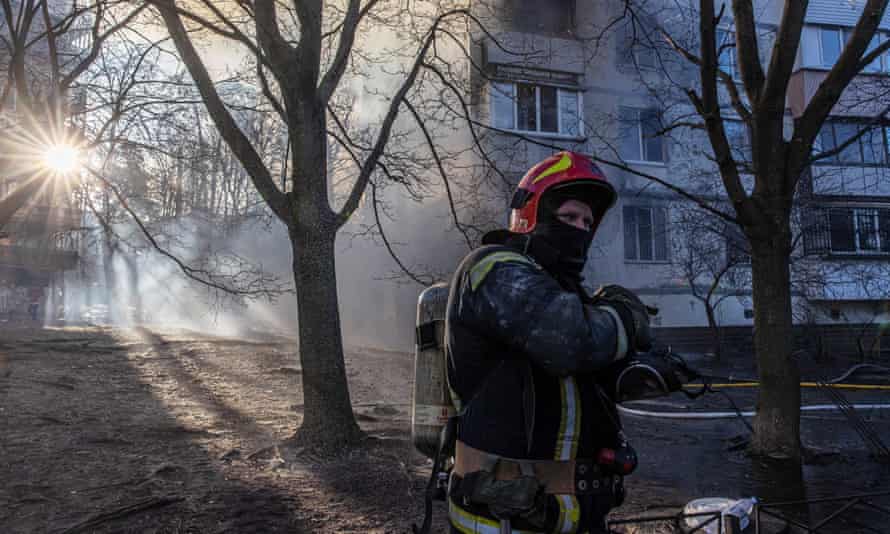 A firefighter stands next to a residential building hit by artillery in Kyiv on Tuesday. Photograph: Roman Pilipey/EPA

Damage from unspecified ammunition prompted a fire in a 10-storey apartment block in the Podilsky district of Kyiv, north of the government quarter. One person was taken to hospital, the state emergency agency reported.

The latest attacks came as the Ukrainian president, Volodymyr Zelenskiy, urged disaffected Russian troops to surrender, saying in a late night address on Monday: “We will treat you as humans have to be treated: with dignity. The way you have not been treated in your army. And the way your army doesn’t treat our people.”

Talks between Russia and Ukraine were due to resume on Tuesday, Zelenskiy said, adding that the previous round had gone “pretty well”.

While previous negotiations focused on humanitarian issues, the latest talks aim to achieve a ceasefire, securing Russian troop withdrawals and establishing security guarantees for Ukraine, the Ukrainian negotiator Mykhailo Podolyak has said, describing the discussions as “hard”. The Russian delegate Leonid Slutsky suggested draft agreements may not be far off.

Zelenskiy said on Monday night the war had become a “nightmare” for the Russians, and claimed that more Russian soldiers had died in Ukraine in the past 19 days than in Moscow’s two wars in Chechnya combined. “You will take lives – you are many – but yours will be taken too,” he said.

Ukrainian armed forces say more than 12,000 Russian troops have been killed since 24 February. The US puts the figure at 5,000-6,000. The number of Russian personnel killed in Chechnya is not clear but it is thought nearly 6,000 died in the first conflict between 1994-96 and about the same number in the second war between 1999 and 2009. Some estimates are much higher.

Despite US concerns that China has already decided to send aid to Moscow, Oleksiy Arestovich, an adviser to the Ukrainian president’s chief of staff, voiced hope that a lack of Russian resources would lead to a peace agreement by May at the latest, with small clashes continuing possibly for a year.

“We are at a fork in the road now: there will either be a peace deal struck very quickly, within a week or two, with troop withdrawal and everything, or there will be an attempt to scrape together some, say, Syrians for a round two and, when we grind them too, an agreement by mid-April or late April,” he said in a video published by several Ukrainian media outlets.

Russia has enlisted more than 40,000 Syrians for the conflict, according to the Syrian Observatory for Human Rights, with media reports inside Ukraine that the first 400 have arrived at its borders.

The observatory said accommodation and training centres had been set up near the border in the Russian region of Rostov, and in Gomel, Belarus.