An injured man has been rescued from a cave in south Wales after being trapped for more than two days at least 300 metres from the surface. The man was brought out of Ogof Ffynnon Ddu in the Brecon Beacons at around 7.45pm on Monday following a 54-hour ordeal.

After being lifted to the surface, he was clapped and cheered by rescuers before being helped into a cave rescue Land Rover to be transported down to a waiting ambulance.

The man, described as an experienced caver, became trapped on Saturday at around 1pm after a fall. His injuries are said to be non-life threatening, but were believed to include a broken jaw, leg, and spinal injuries.

“He’s being assessed at the moment and we’ll know more in a short while.”

Gary Mitchell, South and Mid Wales Cave Rescue Team’s surface controller, said: “To get that news that he’s finally out, he’s on the surface and being well looked after, is clearly ecstatic for all of us.”

Nearly 250 volunteer cave rescuers helped free him from the cave network, one of the UK’s longest.

As the rescue near the hamlet of Penwyllt entered its second day yesterday, conditions above ground deteriorated, with thick fog and drizzle creating a gloomy atmosphere on the mountain.

But spirits remained high in the South Wales Caving Club (SWCC) headquarters, less than a mile from the entrance to the cave, where dozens of rescuers from across Wales and England united in the mammoth effort, and huddled around hot drinks and food.

Throughout the day, teams of about 30 at a time set off from the caving club HQ up the mountain to the cave entrance to take over from their colleagues as they emerged into daylight. Some had been below ground for 12-hour stints. 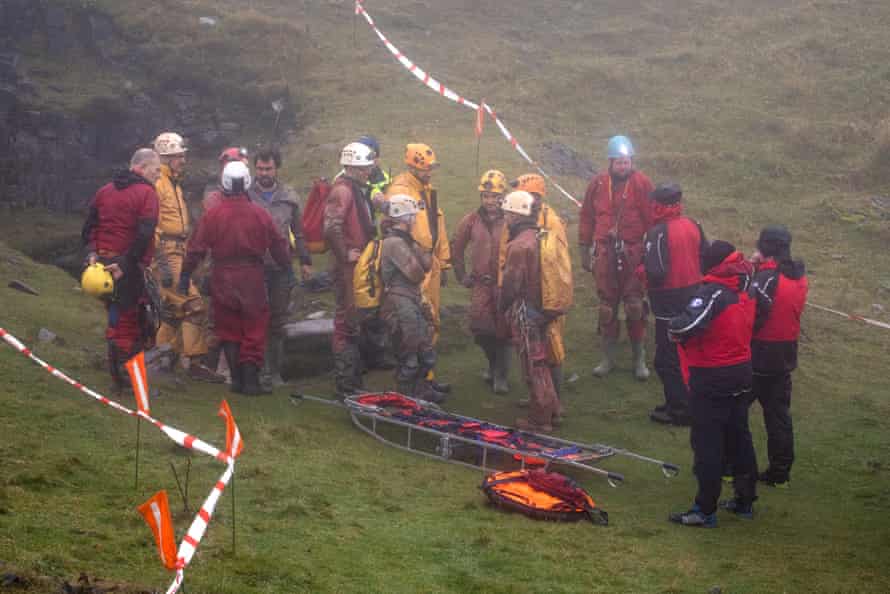 A rescue team wait on the surface near the Ogof Ffynnon Ddu cave system in the Brecon Beacons. Photograph: Gareth Phillips/The Guardian

By the late afternoon, Peter Francis, 74, a representative of South and Mid Wales Cave Rescue Team (SMWCRT), reported: “We can now confirm that the man has multiple injuries, but they are not life threatening. We’re very optimistic now – it’s a matter of time before we get him out.

“He’s warm, he’s stable. The doctor with him is monitoring him the whole time and we’re not worried about him getting hypothermia.”

Two hours later, Gary Mitchell, surface controller for SMWCRT, said the man was in “good spirits”, adding: “We’re nearing the final phases of the operation. We’re about to deploy 20 more rescuers, and medics are now making their way underground to him … The important thing now is to get the casualty the care he needs, which is getting him to a hospital.”

Some of the cavers who had travelled to the scene were involved in the 2018 rescue of 12 boys and their football coach from flooded caves in northern Thailand, 17 days after they got trapped underground, as captured in the new documentary The Rescue. The rescuers this time around were from Gloucester, the Midlands, Derbyshire, Somerset and south-west England.

Along an uphill track, the unassuming entrance to the cave masks a vast network, described by one caver as “intestinal”. A Western Brecons mountain rescue pickup truck was parked outside the entrance for much of the day within a cordon that was widened over time. A stretcher lay in wait for the injured caver.

Paul Taylor, SMWCRT spokesman, said the injured caver was doing well. “He’s doing pretty good as far as I understand. He’s been talking throughout, so that’s something,” he said. Taylor said it was the longest cave rescue ever undertaken in Wales; the previous record was 41 hours.

The teams, including doctors, had to work to secure a safe route out of the cave along which the injured man could be evacuated on a stretcher. They used a system called Cavelink to communicate inside the caves, which allows teams on the surface to transmit text messages through the rock, without cable, to a receiver underground.

The caves were discovered by the SWCC in 1946, according to Natural Resources Wales, and contain streams and waterfalls. The system, whose deepest point is about 275 metres (902ft), can be accessed by cavers with a permit from the club. 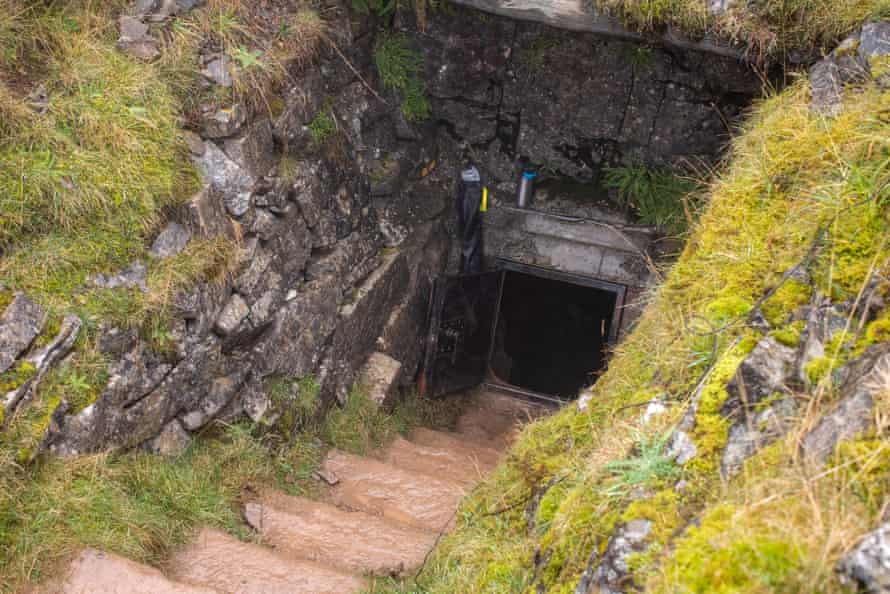 The online guide from SWCC for Ogof Ffynnon Ddu, the Cave of the Black Spring, said: “The through trip from the top to the bottom entrance remains a classic in the UK, and its approximately 61km (40 miles) of passages provide everything from huge chambers, beautiful formations, to yawning chasms and thundering river passages. The routes through the cave are too numerous to mention.”