The call came in at about 1.30pm in the afternoon. A group of 15 people, all Iraqi Kurds, had been found in the woods of Narewka after managing to cross the border from Belarus into Poland. One woman could barely walk. Others had early signs of hypothermia.

The young volunteer who answered the phone – one of about 40 members of Grupa Granica, a Polish network of NGOs monitoring the situation on the border – knew they had to act quickly.

If the Polish police arrived before the doctors, they would, in all likelihood, send the migrants back to Belarus, with the risk that their health conditions could deteriorate and become fatal.

At least eight people have died since the beginning of the humanitarian and political crisis with Belarus, which is accused of deliberately provoking a new refugee crisis in Europe by organising the movement of people from the Middle East to Minsk and promising them safe passage to the EU in revenge for the sanctions Brussels has imposed on its authoritarian regime. Poland, which has deployed approximately 20,000 border police, has been accused in turn of violently pushing thousands of people back across the border.

“We have about eight teams operating near the border and about 40 people in total. Whenever we get calls from the families, we forward the request to our teams and we’ll check who is the person closest to the location,” said Anna Alboth from Minority Rights Group, who is also a member of Grupa Granica. “The migrants often ask for food, water, a doctor or a pair of shoes. I met a family from Syria who didn’t have any footwear.”

After the phone call, there was just time to put on some warm clothes and prepare hot tea to offer to the migrants. 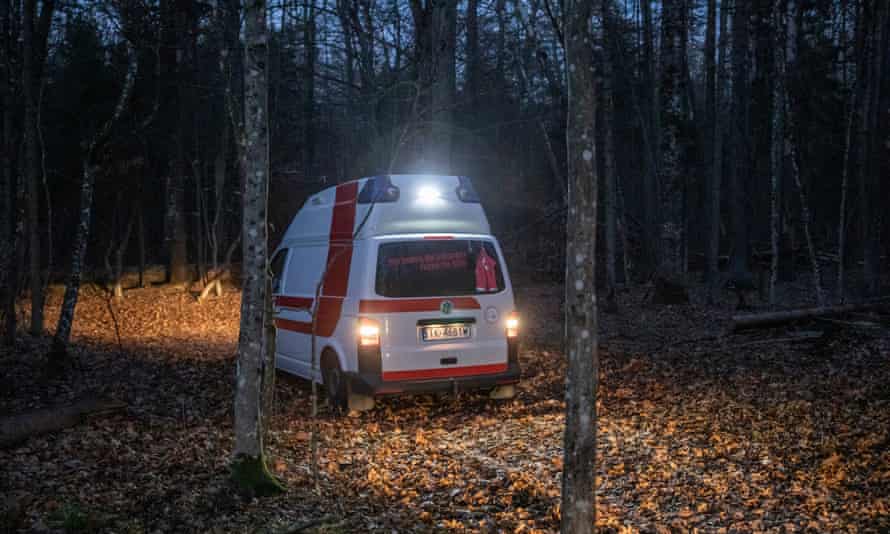 An ambulance in the border region

Working here in the border region is difficult on many levels,” said Anna Chmielewska, coordinator of the Help Center for Foreigners, based in Warsaw. “First of all we cannot enter the secure zone [a two-mile deep militarised zone created by the Polish government] which means we cannot help people there. Only locals can help in the zone. We can reach people only when they are able to pass the zone and meet us outside – and some are not able to go through the zone. Winter is coming and people are not prepared to stay day after day outside in the cold. We’re afraid that bad weather will cause more deaths.’’

The team were able to find the group in the woods near Narewka before the Polish border police. They had crossed the border from Belarus the day before. It was starting to get dark and the temperature had dropped to near zero degrees celsius. Once on site, the team gave blankets and hot tea to the families.

“The border police can be very aggressive,” said Chmielewska. “We don’t do anything illegal but they make us feel as if we are. Helping people should be very normal. But in this situation, it becomes like a secret activity. I just feel in these times, here, in this piece of border, what is legal is so far from what is moral.”

At about 4pm, the police arrived in the woods. Minutes earlier the volunteers had explained to the group how to apply for asylum.

Asylum lawyers then explained to the police their obligation to allow people to submit applications for international protection, citing how any pushback would be a violation of various international laws. There was just time for a last hug between the asylum seekers and volunteers before the officers took the group away to a border patrol station.

Then the phone rang again.