My father was brutally killed by the Taliban. The US ignored his pleas for help 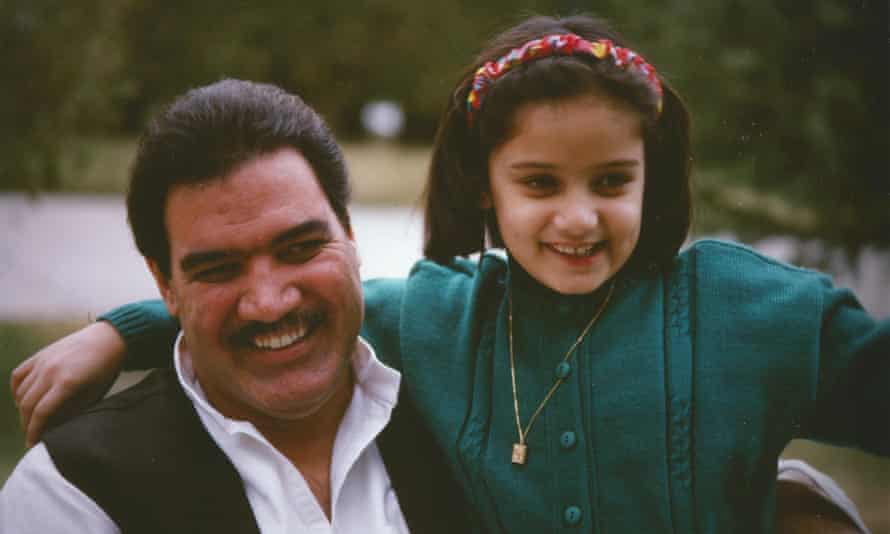 Afghanistan and Afghans have always been misunderstood, but the tragedy of my country is one of geopolitics, not of genes.’ Former Afghan president Najibullah with his daughter, Muska, in Kabul, 1989. Photograph: Muska Najibullah


The night of 27 September 1996 was always going to be a long one. I was awake studying for midterm exams when my mother, calm but uneasy, heard the news that my father had been taken out of the United Nations compound in Kabul.

I was ecstatic at first. My father, Najibullah, the former president of Afghanistan, would finally be reunited with his family. He, along with my uncle, had been living in the UN compound since 16 April 1992, when forces within his government had defected. His resignation and departure was part of a UN plan, intended to end the civil war and clear the way for a peaceful coalition government. But the resulting power vacuum quickly sucked Afghanistan into a vortex of anarchy.

After four years apart, my mum, sisters and I were eagerly awaiting my father. And now that a faction known as the Taliban were creeping closer to the Afghan capital, I was convinced that my family’s reunification was days away. While I had the naive positivity of a child yearning for her father, my mother sensed a more grim reality on the horizon. She watched the news all night. “My sixth sense tells me he’s not coming,” she told us, fear in her eyes.

In the 1990s, before the internet connected the world, little was known about the Taliban. Radio reports would herald their significant gains made in the south-west of the country, describing the militia group as fighting for “peace, security and stability”, an appeal that was popular with war-weary Afghans. That night, I thought we would meet my father soon. We spoke to him hours before the Taliban entered Kabul. There was nothing unusual in his voice. It was a normal exchange of words, one that I vaguely remember. The conversation was meant to be one of many, yet fate had different plans.

In the early hours of the night, when they entered the capital city, the Taliban went knocking on the gates of the UN compound to visit their “special guest”. Hours later, a breaking news flash: “Former Afghan leader, President Najibullah executed.” I didn’t know what the word meant. I turned to my sister but her expressionless face made me panic. Rushing to grab a dictionary, I flipped to the letter E.

This is the first time I have shared my personal story. Not because I am the daughter of a former president of Afghanistan, but because what is happening to my country now is distressingly similar to what happened then: 25 years ago today, the Taliban took over Afghanistan. And 25 years ago today my life, and those of so many others of my generation, changed for ever – and not all for the better.

Before my father, Aba, became the president, our life in Kabul was blissful. We lived in a tiny apartment in a vibrant neighbourhood called Macroyan. The early years of my childhood was a time when my family was still together, when we were a unit of five. We spent most of our time in the aftaw-khana, the sunroom. In the evenings, Aba returned home, and we gathered around him for dinner, catching up on the day’s highlights – from work, school or what the elders heard on the news. But all this changed when Aba became the president.

We moved from our modest, cosy apartment to the grandiose presidential palace, the Arg. Our new residence, though heavily guarded and safe, isolated my siblings and me from everything we had ever known. Evening gatherings at the playground and the impromptu market runs for bubblegum and balloons came to a halt. At barely four years old, I found our new home claustrophobic. There was ample space but no one to play with. As the changing seasons came round, we hardly saw Aba. He was always busy, away at work. Eventually, those commonplace family meals were also a rare occasion.

Aba was a big man; imposingly tall and burly. He had acquired the nickname “Najib the Bull” because of his dominant personality. He had an intimidating gaze and a voice that roared with force. But for me, just like any little girl and her father, Aba was my hero. One night in 1986, the mujahideen set ablaze an army ammunition depot in Qargha lake, near Kabul. I cried for him to stop the noise, as the explosions echoed across the city. He wrapped me in a blanket and held me tightly in his arms. “You are safe with me. No one will harm you,” he said, and I believed him. But in 1996, when the Taliban marched into Kabul, there was no one to keep him safe.

The image has haunted me since the day of Aba’s brutal passing. Take a moment to look, or don’t, but it was the last I saw of him: hanging from a traffic pole, he and his brother mutilated for the whole world to see. As I watched the Taliban display them like some spectacle, I felt helpless and humiliated. At 13, I became an adult overnight. I lost my father, my home and any hope of returning to Afghanistan.

People try to imagine what it feels like to be an Afghan living in exile at this point. It’s difficult to describe the feeling of displacement to someone who hasn’t been through it. Although you are safe, you feel dislocated. There is too much to hold, too much to bear and sometimes it all feels so purposeless. There are glimpses of happiness when you hear stories of hope. You feel alive and inspired, and imagine what normality could look like in the country. You fantasise about your own life once you return. Like a jigsaw puzzle, you piece together old stories of your family and envisage a future that is absolute. Then, all that is suspended once another cycle of conflict takes over.

In 1992, my father appealed to the US to help Afghanistan become a bulwark against the spread of Islamic fundamentalism. He said: “If fundamentalism comes to Afghanistan, war will continue for many more years. Afghanistan will turn into a centre of world smuggling for narcotic drugs. Afghanistan will be turned into a centre for terrorism.” His warnings were ignored. With the withdrawal of Soviet forces from Afghanistan in February 1989, virtually all western nations abandoned their embassies and ostracised my father’s regime. Calling him a communist puppet, a murderer, a traitor, he found himself isolated, fighting a very lonely war. And then, a decade later, his premonitions came true. Triggered by the 9/11 attacks, the US invaded my country to fight Islamic terrorism and began what would be its longest war. I wonder, had the world listened to him, would it all have turned out differently?

Afghanistan and Afghans have always been misunderstood. Respected commentators talk about the brave and barbaric tribes who roam through our forbidding mountains, and how difficult it has been to unify us. This thinking is trite. The tragedy of my country is one of geopolitics, not of genes. A nation on the margins, we are constantly being betrayed by mercenaries in the pay of foreign rulers. All Afghans are yearning for peace.

As individualism and individual expression are once again taken hostage by the Taliban, many Afghans are fleeing. They fear losing their identity to a group that does not represent them, and in leaving they are being stripped of who they really are. Like my family, many will restart their lives from scratch along with a suitcase of memories and a hope to return. What will become of the nation’s brightest? Your next Uber driver in New York City? Or the cheerful kebab seller at your corner shop in Kilburn? And what about those back home? How many girls and women will you see on the streets? Will the kids go to school? Will they get a chance to see their fathers grow old?

Democracy didn’t bring peace to Afghanistan. Nor did the Doha agreement, a foreign and flawed deal that neglected the voices of the common people. Despite all these adversities, Afghans have come a long way. The old ways are not for this world, and many Afghans expect something different out of life, far more so than they did even 25 years ago. What it means to be Afghan has changed over the course of decades of conflict and violence. Perhaps now is an opportune time for us to educate the rest of the world about who we really are – our shared values, unity, dreams. Afghanistan is not a “graveyard of empires”, nor a nation of refugees. We are displaced, but one day will return – soon, inshallah!