Troops have been deployed in British Columbia to help stranded residents and search areas hit by landslides and floods after a powerful storm dumped a month’s worth of rain in two days across a swath of the Pacific north-west in Canada and the US.

The Canadian government approved a request for federal assistance from the embattled province on Wednesday, the minister of emergency preparedness Bill Blair confirmed.

Some members of the armed forces were already on the ground and additional troops were expected to arrive shortly, defence minister Anita Anand said.

It comes after British Columbia’s premier issued a state of emergency, warning that the death toll is expected to rise.

“While Environment Canada called this a 1-in-100 year event, we know the increased likelihood of intense storms is due to the climate crisis,” Horgan added.

He said the province will impose travel restrictions to ensure critical goods can be brought to communities. Officials also warned of a looming animal welfare crisis with agriculture minister Lana Popham noting “thousands of animals have perished” in the flooding so far.

South of the border in Washington state, water levels showed signs of dropping on Wednesday after floods damaged three-quarters of the homes in the border town of Sumas, leaving 1,600 residents without power and forcing hundreds to flee.

But in Canada, with at least one woman confirmed dead in a landslide , communities cut off from the rest of the province saw little sign of respite. 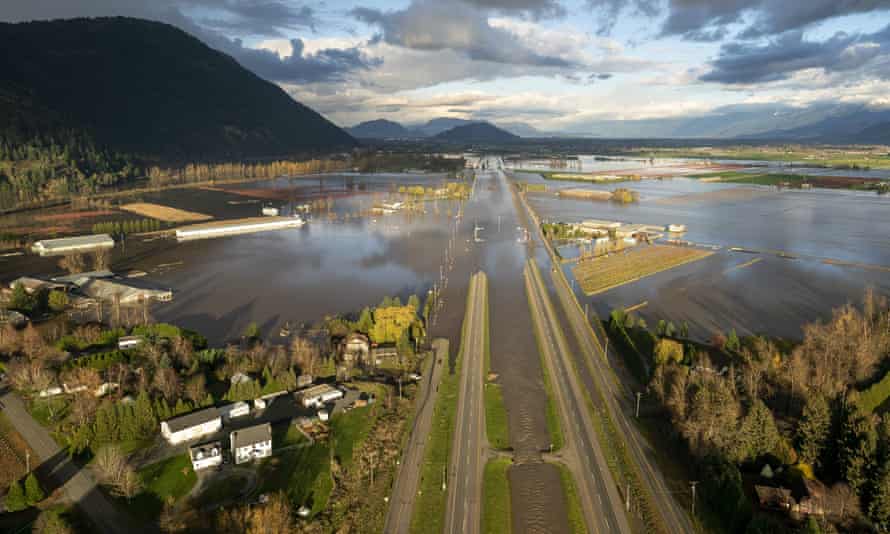 Vancouver remained isolated from the rest of the country by road and the two largest rail companies, Canadian National and Canadian Pacific, have said damage to their tracks has halted freight service.

In the city of Abbotsford, emergency crews using helicopters and boats rescued 184, as the mayor warned “catastrophic” flooding could occur if its pump station failed.

“Nothing is worth your life,” Henry Braun told residents in an emergency news conference. “I implore anyone who is listening to this to please heed the evacuation order and leave. Tomorrow morning may be too late.”

Much of the area lies on the former site of Sumas Lake, a vast body of water which was drained in the last century. City officials feared that pumps, which divert water from the basin at a rate of half a million gallons a minute, were on the verge of failing – meaning even more water would inundate parts of the city.

Hundreds of locals joined efforts to stack sandbags around the pumping station, and on Wednesday morning, Braun said the river levels were dropping – and it appeared the pumps would hold.

Trina Enns told CBC News said she and a neighbouring family slept inside a McDonald’s in Abbotsford after evacuating their homes nearby.

“Lots of people slept in their cars overnight,” she said. With the surrounding area underwater, the manager arranged a boat to bring people to the restaurant.

Officials in the town of Merritt also pleaded with residents who had defied a mandatory evacuation to leave their homes, as a bridge in the British Columbia community collapsed into the swollen Nicola river.

The local water treatment facility was overwhelmed by flood waters earlier in the week, so the water flowing through the city is now mixed with sewage and is undrinkable.

Snow fell on the flooded town overnight, but dozens of locals, fearing their homes could be looted, have refused to leave, instead sharing tips on finding food on social media.

Residents of Sumas Prairie, a vast area of agricultural land to the north-east of Abbotsford, have spent the last two days desperately trying to move farm animals to safety, with some taking to jet skis to herd cattle through the floods. 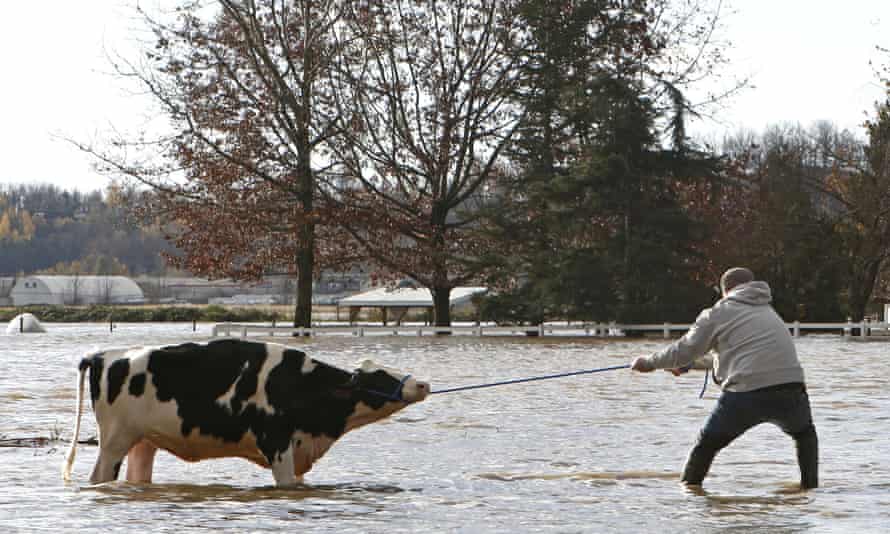 A person tries to rescue stranded cattle from a farm in Abbotsford, British Columbia, on 16 November. Photograph: Jesse Winter/Reuters

Chloe Devito was devastated to learn that her 21-month-old dog Rio was had drowned when the floods overwhelmed a kennel facility in Sumas Prairie.

“We were told it all happened so quickly. The water came in through the house and and the power was out. The owner said she was like up to her neck in water, freezing cold, muddy, black water, trying to pull the dogs out of the house,” she told the Guardian. “We just don’t know how it happened so quickly, we don’t understand.”

Evacuation alerts have been rescinded in the city of Chilliwack in Abbotsford as well as the Eagle Mountain Areas, Ten Oaks, Straiton Areas and Matsqui Village. Flood warnings in the affected areas of Fraser Valley and Fraser Canyon have also been downgraded, according to the British Columbia River Forecast Centre.

As British Columbia officials started to tally the damage, angry residents asked why the provincial government failed to use its mobile phone alert system even as record rains fell, highways were destroyed and bridges collapsed.

The alert network was rolled out nationally three years ago, but British Columbia has never sent out a message, not even in July when a deadly “heat dome” overwhelmed south-western parts of the province, killing nearly 600 people.

“It is one tool,” said the province’s public safety minister, Mike Farnworth, on Monday. “It is not a silver bullet.”

On Tuesday, acknowledging “an absolutely unprecedented, torrential deluge like we’ve never seen before”, Farnworth said his government would assess how the system could be improved in the future.

Kim Johansson, 38, a mother of two who lives on a low-lying island suburb of Vancouver, said she only found out that roads were closed when she tried to reach her children’s school on Monday morning.

“There were neither road nor flood warnings,” she said, adding: “It seems nobody expected the storm to be so devastating. The rain was just incessant for 24 hours.”

For those in areas cut off by flood waters, the coming days will prove to be a challenge. 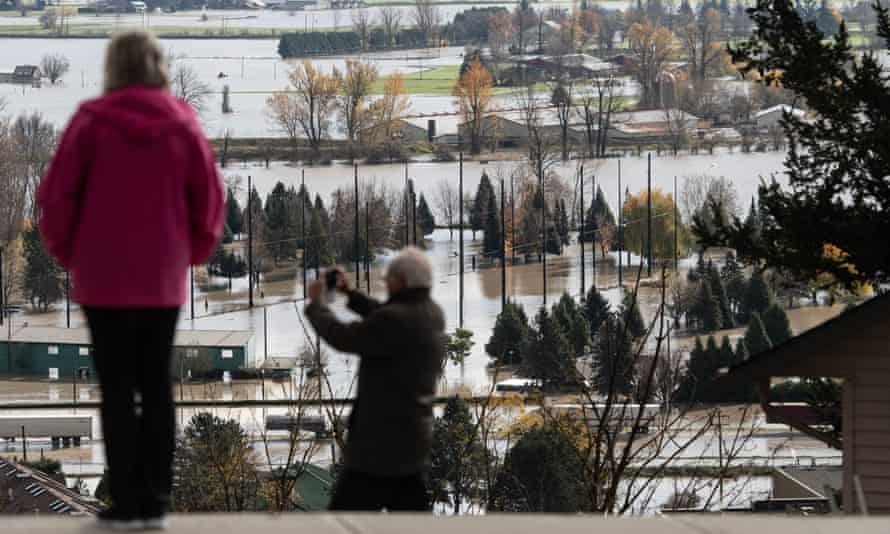 The roads into our community are washed out,” said Andy Harrington, who lives near the city of Chilliwack, 100km (62 miles) east of Vancouver. “Most of the city is dry at the moment but it’s completely cut off. We’re surrounded by water.”

He said the rain fell so hard “it felt like being in a bathroom shower for 24 hours”.

Harrington said there was a strong sense of community spirit, with neighbours checking in on each other and clearing debris. 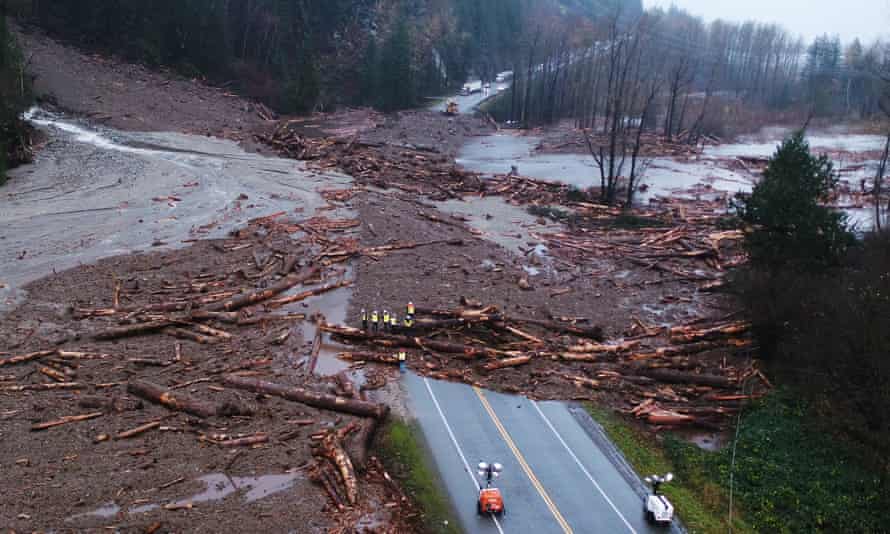 “But longer-term, there’s just no way to get supplies into Chilliwack at the moment and we don’t know how long that’s going to be. There’s no roads.”

Harrington, who works in global humanitarian relief and frequently travels to areas with crumbling infrastructure, said he remained in shock at the devastation.

“Things that we just thought would always be there – like highway bridges that were built 30 years ago that were part of our life – were absolutely destroyed.

“Mountainsides just collapsed on to roads. The level of destruction is really difficult to comprehend.”