Three men have been arrested under terror legislation after a taxi explosion outside Liverpool Women’s hospital that killed the passenger.

The men – aged 29, 26 and 21 – were detained in the Kensington area of the city and arrested under the Terrorism Act, police said.

A street in the city’s Sefton Park area was cordoned off by armed police on Sunday and some people were evacuated from their houses as part of “ongoing enquiries into the car explosion”, police said.

A convoy of seven unmarked vehicles – three vans and four cars – entered the cordon early on Monday morning, while officers wearing vests marked “Negotiator” were seen entering the cordon earlier. A fire crew was on standby nearby but most armed officers had reportedly left by 3am, witnesses said.

Investigators believe it is unlikely that the explosion, shortly before 11am when the Remembrance Sunday silence was due to begin, was caused by a fault with the vehicle. The flames spread rapidly, engulfing the taxi in a fireball.

The cab driver, who managed to escape before the flames spread, has not been arrested. Police said he is in hospital in a stable condition.

The explosion happened outside the main entrance to the hospital, and police are trying to determine if the explosion was deliberate and whether there is significance in the location. The site is also not far from Liverpool cathedral where the city’s Remembrance Sunday event was taking place.

Police have been working on establishing the identity of the deceased man, and any associations that might shed light on the explosion.

The investigation is being led by counter-terrorism police who are being assisted by MI5, which has the lead role in developing intelligence to counter terrorism. 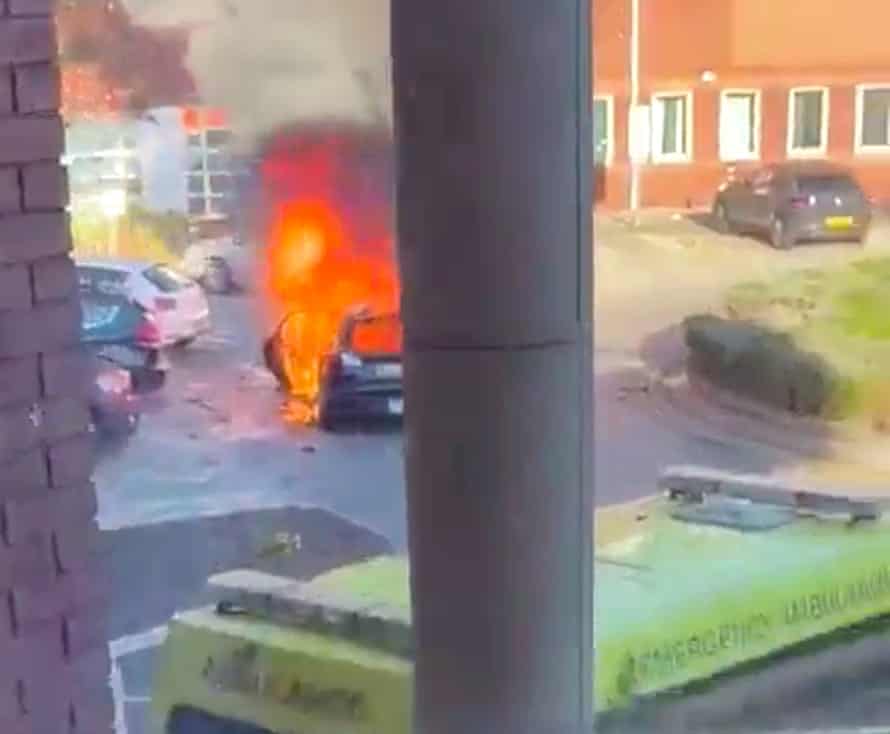 The vehicle on fire outside the hospital. Photograph: Twitter

In a statement, counter-terrorism police north-west said: “We are leading the investigation with support from Merseyside police, and are keeping an open mind as to what has caused the explosion. We are working at a rapid pace to try and establish the circumstances behind this and will update in due course.”

Liverpool’s mayor, Joanne Anderson, described the incident as “unsettling and upsetting” as she thanked the emergency services for their swift response.

Police were called at 10.59am on Sunday morning to reports of a car explosion outside the city centre hospital. Photographs of a burning car quickly circulated on social media, as well as reports that the bomb squad was in attendance, alongside police, fire crews and the ambulance service.

“Unfortunately, we can confirm that one person has died and another has been taken to hospital where he is being treated for his injuries, which thankfully are not life threatening,” Merseyside police said.

“So far we understand that the car involved was a taxi which pulled up at the hospital shortly before the explosion occurred.

“We are keeping an open mind as to what caused the explosion but given how it has happened, out of caution, counter-terrorism police are leading the investigation supported by Merseyside police.”

Boris Johnson said: “My thoughts are with all those affected by the awful incident in Liverpool today. I want to thank the emergency services for their quick response and professionalism, and the police for their ongoing work on the investigation.”

It is understood the three arrests took place around Boaler Street in the Kensington area. The PA news agency reported locals saying armed officers swooped on a terrace house in Sutcliffe Street, off Boaler Street, in the afternoon and arrested one suspect. Sections of Boaler Street and Sutcliffe Street remained cordoned off, with a heavy police presence at the scene as inquiries continue.

A similar police scene was in place at Rutland Avenue in Sefton Park, with counter-terrorism officers sighted in the neighbourhood. Locals said police arrived from about 1pm as officers went on to guard a terraced property as the immediate surrounding area was cordoned off.

The chief constable of Merseyside police, Serena Kennedy, later offered her reassurance over the incident. She said: “While I understand that today’s incident may cause concern in our communities, it should be pointed out that events of this nature are very rare.

“Merseyside police will continue to liaise with community groups, community leaders, partner agencies and individuals in the coming days and weeks to make sure any concerns are addressed and ensuring that we provide the best possible service to local people.

“There will also be an increased and visible police presence on the streets of Merseyside and I would encourage people to engage with my officers and raise any concerns they may have.” She urged people not to speculate about what had happened.

Liverpool Women’s hospital said visiting access had been restricted “until further notice” and patients had been diverted to other hospitals “where possible”.

Carl Bessant, whose partner had just had a baby, was inside the hospital at the time of the blast. He told the BBC: “We were so close and she was feeding the baby when it happened. We heard a loud bang and looked out of the window. We saw the car on fire and someone jump out ... screaming, and there was someone inside the car.”

In a statement, the hospital said: “We are reviewing our patient activity for the next 24-48 hours and patients should wait to be contacted for updates about any planned appointments or other attendance at the hospital.

“Our staff are being permitted to leave and enter the hospital under the supervision of Merseyside police. We would like to say thank you for the cooperation and support of our patients, visitors and staff who have been impacted by this incident, in particular those members of staff who were at the scene at the time of the incident.”

Phil Garrigan, the chief fire officer of Merseyside fire and rescue service, said the car fire was “fully developed” when two appliances arrived shortly after 11am.

He told reporters at the scene: “The operational crews extinguished the fire rapidly but, as has been reiterated by the police chief constable, there was one fatality. Another individual had left the vehicle prior to the fire developing to the extent that it did. Our thoughts are with them and the families of those involved.”

The home secretary, Priti Patel, tweeted: “I am being kept regularly updated on the awful incident at Liverpool Women’s hospital. Our police and emergency services are working hard to establish what happened and it is right they are given the time and space to do so.”

Cordons remained in place on Sunday evening, alongside some road closures.

The UK terrorism threat level remains at “substantial”, meaning an attack is likely.

In October, the Conservative MP Sir David Amess was killed in an alleged terrorist attack while holding his constituency surgery in Leigh-on-Sea in Essex. A man has been charged with his murder and is due to stand trial next March.

Counter-terrorism officials say most plots they thwart are motivated by a violent extremist Islamist ideology, with the next category being those motivated by far-right beliefs.