In New Hampshire a motorcyclist crashed after being assaulted. In New Jersey, a terrified postman rang 911 after a dozen members attacked at once. And in Michigan, one town armed public workers with pepper spray.

In September, the Daily Messenger in upstate New York had had enough and published a tongue-in-cheek call to arms: “We need to call out the militia, folks. This could be the greatest threat against humans and their civilization since Krakatau erupted. Wild turkey all over America are rioting, rising up in rebellion against the influx of people into their habitat.”

The wild turkey has lived in what is now North America for more than 10,000 years, and was branded a “bird of courage” by founding father Benjamin Franklin in 1784.

It’s deeply symbolic, for some, of Thanksgiving; as the animal pardoned by the US president each year before 46 million commercially raised turkeys are eaten by an estimated 88% of the population.

It’s also one of the greatest conservation success stories in modern America, going from all but extinct in large parts of the country as recently as the 1970s, to so numerous that the 4ft-tall, 20-30lb, highly adaptable animals have successfully “overrun” hundreds of US cities.

Trashing homes, intimidating people and holding up traffic, earning their reputation as one of the most bad-tempered neighbours on the block.

Or, as Scientific American, put it, “ugly hooligan nuisance birds”.

“Every year they grow astronomically, the population is absolutely huge,” said Carter Heath, a veteran hunter from New Hampshire and the regional director of the New England chapter of the National Wild Turkey Federation (NWTF), a citizen-led group that advocates for regulated hunting.

The 49-year-old, who dresses in head-to-toe camouflage and hangs the heads of favourite kills in his living room, added: “In one way it’s a miracle. I don’t think anyone anticipated that it would be this successful.” 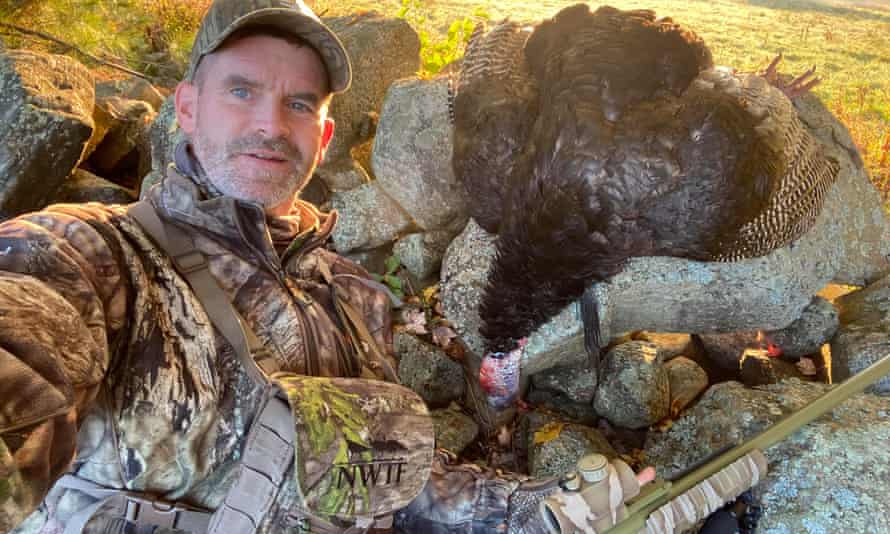 In precolonial times, there were an estimated 10 million turkeys across what are now 39 US states.

But thanks to unregulated hunting and the clearing of forests for farmland by European settlers, numbers plummeted to just 30,000 to 200,000 by the 1930s.

By 1863, when President Abraham Lincoln made Thanksgiving an official holiday, wild turkeys had virtually disappeared in New England, according to the New England Historical Society.

In 1884, Harper’s Weekly predicted that the bird would soon become “as extinct as the dodo”.

The campaign to bring them back started in the 19th century, with conservation laws, hunting caps and the reappearance of forests credited partly to abandoned farms after the Industrial Revolution and Great Depression.

But it wasn’t until the 1950s to 1970s that conservation groups began trapping a few of the remaining birds at a time and shipping them around the country to start new colonies.

Bernier said it was a mixed blessing.

“The turkeys came back, which was amazing from an ecological point of view …unfortunately we live in their territories now,” he said.

“It didn’t take long for them to adapt. They can exist deep into suburbia with no real predators and a ready supply of food.”

In 2018, David Scarpitti, a turkey biologist for MassWildlife, which controls the population in Massachusetts, told the conservation group the National Audubon Society: “It’s gone from a conservation success story to a wildlife-management situation.”

There are hundreds of urban conflicts reported each year, with some towns banning residents from feeding them, citing feeding as a catalyst. 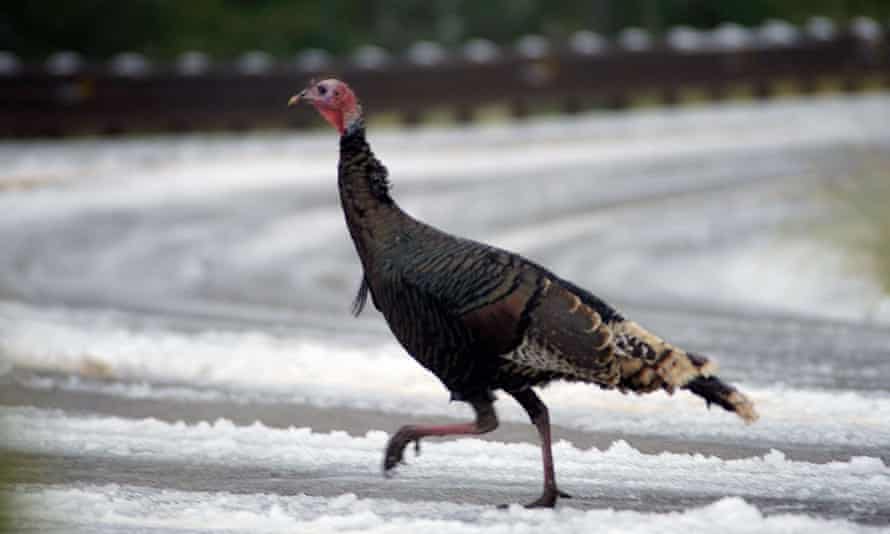 A wild turkey trots across the icy road to Sandia Crest in New Mexico. Hundreds of human-turkey conflicts are reported each year in the US. Photograph: Albuquerque Journal/Rex/Shutterstock

For bothersome birds, however, there are few ways for urban areas to safely cull large numbers, with just two official hunting seasons a year, often allowing only bow and arrows. The usual guidance on managing an aggressive bird is to to clap your hands, be assertive or wave an umbrella.

In 2020, one of the most notorious offenders, a turkey called Gerald in Oakland, California, was relocated after he attacked more than 100 people in 12 months.

The rogue turkey split the city into those who thought Gerald should have special privileges, and those who wanted to eat him.

The incident hints at another complex part of American turkey-lore: some people love them.

For every attack, each state seems to have their own adored “People’s Turkey”, from Godzilla in Michigan, to Dorothy in Kentucky, to Smoke in Wisconsin, who was appointed an honorary mayor.

People flood social media with videos, start fanclubs with thousands of members, even prosecute their “murders”, including four teenagers in Michigan charged with killing Mr Gobbles in 2019.

The suburban wild turkey is clearly here to stay. Even if not everyone is happy about it.

In Somerville, Massachusetts, last year, a large male nicknamed “Pat Cluck” or “Mayor Turkatone”, with a history of aggression, was euthanised by the state.

While there was an outpouring online from those who enjoyed seeing him strut down the street, one mother in her 30s, whose car was repeatedly vandalised by Pat, told the Guardian: “I won’t lie. He got what he deserved.