How to make the perfect vegetarian wellington – recipe

Though I’ll defend the nut roast (or, somewhat big-headedly, my nut roast, at least) to the death, I’ll generously concede a vegetarian’s right to celebrate Christmas with something else occasionally. And a wellington is a stand-alone dish that has the wow factor to cut it for the most special of occasions. Of course, just about anything can be wrapped in rich, flaky pastry and baked until golden brown, but to displace the nut roast from my affections, this needs to be a recipe that looks at least as impressive inside as the blushing beef version, and that pairs as well with roast spuds, sprouts and cranberry sauce as it would with a simple jug of gravy. This wellington ticks both those boxes (even if I say so myself), can be prepared up to a day in advance, is easily veganised and won’t cost you £60 in beef fillet. Happy Christmas!

Thinking about a wellington, it strikes me that it ought to be more than just a giant vegetarian sausage roll, delicious as that might be – we all love Elly Curshen’s fruity nut wellington from her book Green, and Olive magazine’s chard, walnut and stilton filling, but it can’t be denied that, once cut, it is recipes, such as Jack Monroe’s and Anna Glover’s for BBC Good Food, with something solid in the centre that look more impressive. Monroe and Glover both go for beetroot, which is almost worth it just to steal the name beet wellington from Jack, but, even when it’s boiled in vinegar and sugar, as the former suggests, my testers and I find it just a bit sweet for our tastes.

Glover also includes butternut squash, as does the recipe on Jamie Oliver’s website. Though the latter’s directions for cutting it are somewhat unclear, the picture suggests that, like Glover’s, it’s meant to be in small pieces. Without her central beetroot, however, and good as it tastes, the latter feels like any vegetarian pie. Instead, I’m going to use the squash in two large blocks to replicate the shape of the beef in a standard wellington, and bake it with a savoury glaze, rather than Oliver’s chilli, coriander, cinnamon and rosemary, to keep the flavour profile simpler (note that any large, dense winter squash will work here; indeed, a fudgy kabocha or crown prince would probably taste even better, though the shape is less convenient for cutting into blocks, so you might need to improvise).

Monroe, Glover and Oliver’s team all incorporate the traditional mushroom duxelles into their recipes, for its “distinctive depth of flavour”, as Monroe puts it in her book Vegan(ish), though, unlike Glover’s classic, creamy version, she blends her mushroom mix with chestnuts and spinach to make a savoury paste.

Mushrooms, of course, are a familiar face in vegetarian food, thanks to their high umami content, which is popularly claimed to “make up” for a lack of meat (though why one fine-tasting ingredient should be better than another is unclear), but not everyone uses them, perhaps because they’re sick of eating mushroom risotto, mushroom lasagne and the like all year round. Alliums in some form, however, are mandatory: Olive uses whole shallots, Glover chopped ones, Curshen leeks, Oliver red onions and Monroe yellow ones. I like the faintly winey flavour of shallots with mushrooms, but be assured that any of the above will be delicious.

I feel that the sweetness of the squash demands the balancing savoury notes of a duxelles, albeit one with a chunkier texture to compensate for the softness of a baked butternut squash in comparison with even the rarest of beef fillets. Roughly chopped chestnuts, as used by almost everyone, have a festive feel, but I prefer the bitter crunch of Olive’s walnuts (Curshen’s mixed nuts would also be delicious), especially in combination with cranberries, which feel more Christmassy than her dates or Oliver’s sultanas. Almost any dried fruit could be substituted, though I might draw the line at anything too tropical.

And, for no other reason than I love greens, and that they look great in Olive’s wellington, I’ve included a layer of spinach, sauteed to stop it steaming in situ and making the pastry go soggy. If you’d like to use chard instead, or even finely chopped kale, you’ll need to cook it for a little longer. 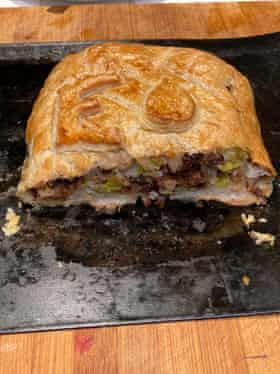 Elly Curshen uses Marmite to enhance the savouriness of the mushrooms.

Because I want this wellington to work with as many sides as possible, I’ve confined myself to the citrussy flavour of thyme, rather than adding lots of herbs and spices. I will, however, like clever vegetarian sausage Curshen, be stirring in a little Marmite to enhance the savoury flavour of the mushrooms. If you eat dairy, you might like to substitute some crumbled stilton (most are vegetarian, but do check) as in the Olive recipe.

The beef in the classic wellington is sometimes wrapped in a crepe intended to absorb its juices and so stop the pastry going soggy. Monroe makes vivid green spinach pancakes for her version, explaining that it “acts as a barrier between the vegetables and the pastry, keeping the former tender and the latter perfectly crisp”, but much of the water should have already been evaporated from the pre-cooked mushrooms, spinach and squash, so I don’t think this layer is necessary. I have, however, added breadcrumbs to the mushroom mixture, not to soak up any remaining moisture, but because they give Glover, Curshen and Oliver’s wellingtons a slightly stuffing-like quality that will more than make up for not being able to eat any of the sausagemeat stuff that may also be on the table.

You can, of course, make your own pastry, but the bought kind is much quicker, easier to work with, and also comes in vegan form. If animal products are a concern, replace the egg wash with Monroe’s plant-milk glaze, and add a drop of soy sauce if you’d like a really golden finish.

1 butternut squash – one with a long neck, because that’s the bit you use here; save the rest for soup or curry
2 tbsp melted butter, or oil
1 tbsp Marmite, or soy sauce
500g puff pastry
1 egg beaten with a little water, or 3 tbsp plant milk 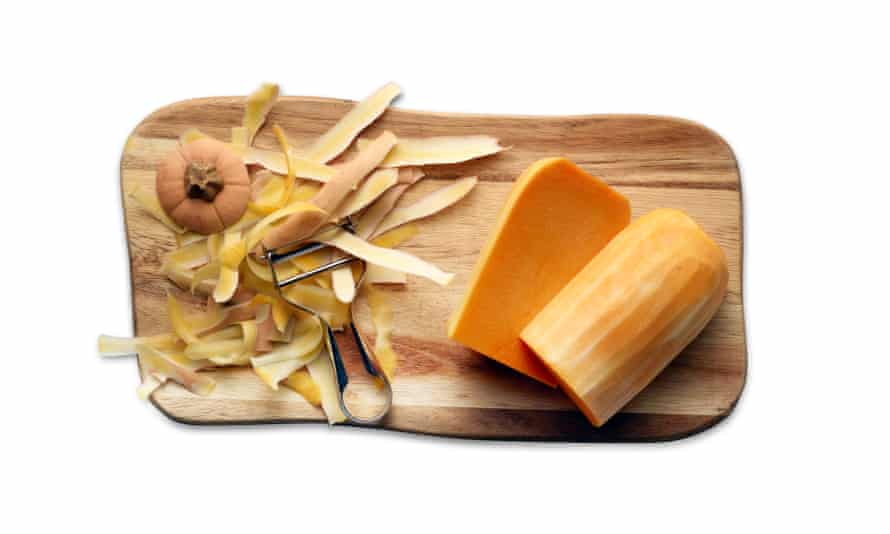 Heat the oven to 200C (180C fan)/390F/gas 6. Cut the squash at the point where the neck broadens out, and trim the stalk off the top. Peel the neck, then cut it in half lengthways (save the rest of the squash for something else). Warm the butter or oil, then whisk in the Marmite (or soy sauce) until well combined. Put the squash on a baking tray, brush all over with the glaze (save the excess for later), then roast for about 35-40 minutes, until tender. Remove and leave to cool. 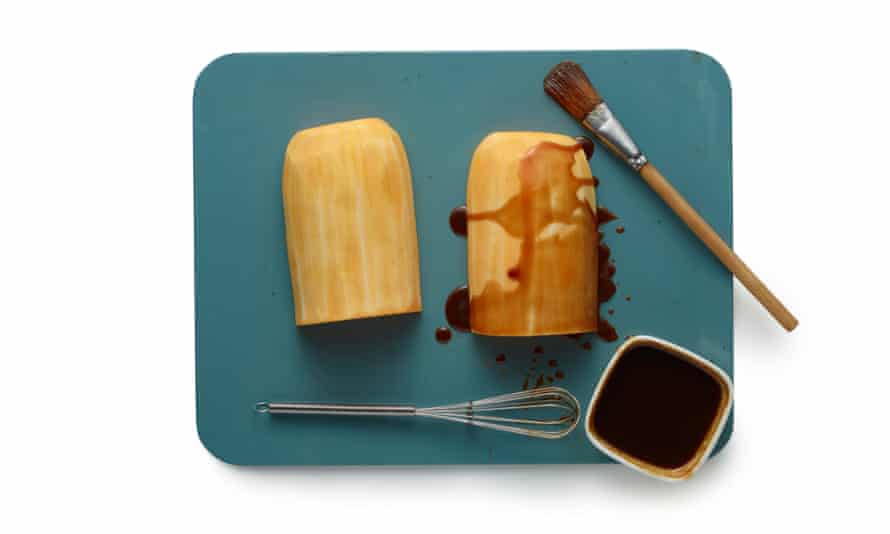 While the squash is roasting, for the mushroom layer melt the butter or oil in a frying pan over a medium heat, then saute the shallots, stirring, until softened. Add the mushrooms, season and cook, stirring regularly, for about 10 minutes, until soft and dry; add the thyme leaves towards the end of this time. Stir in the walnuts and cranberries, followed by the breadcrumbs and the reserved squash glaze, take off the heat and leave to cool. 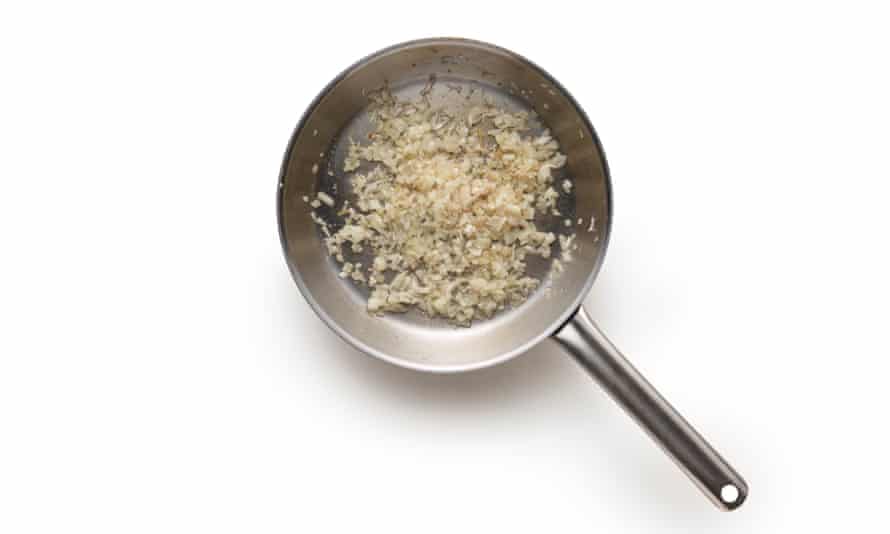 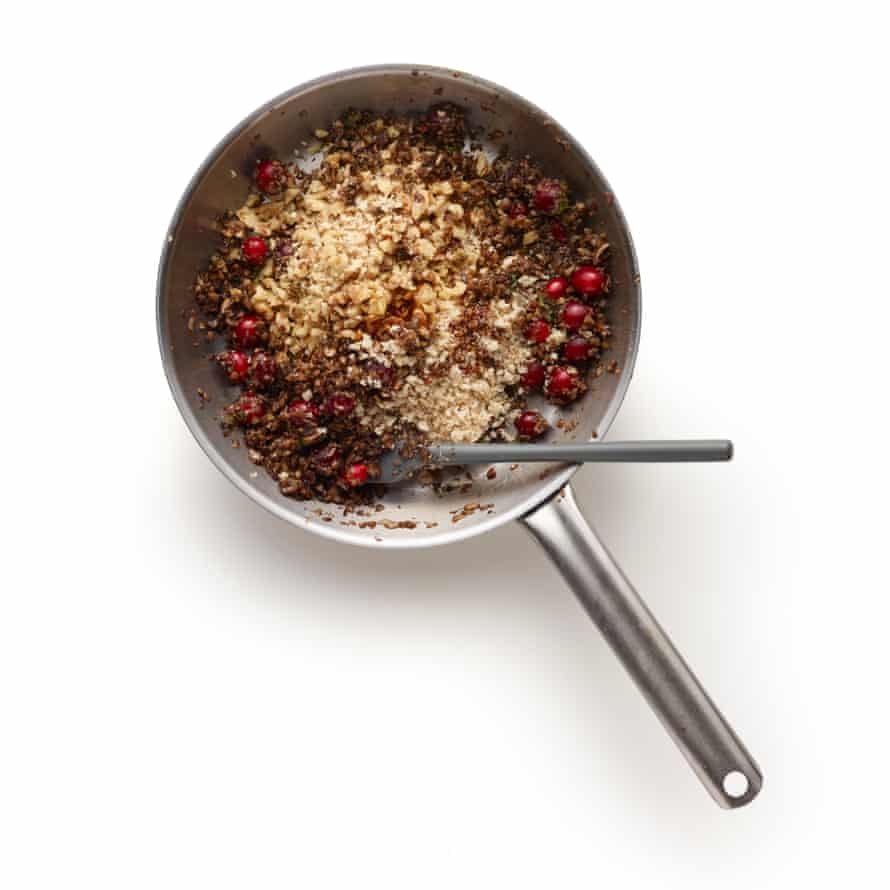 Bring a large pan of generously salted water to a boil, then drop in the spinach and blanch until just wilted (a few seconds for baby leaf, a little longer for mature leaf). Drain, run through with cold water, then squeeze out as much liquid as possible. 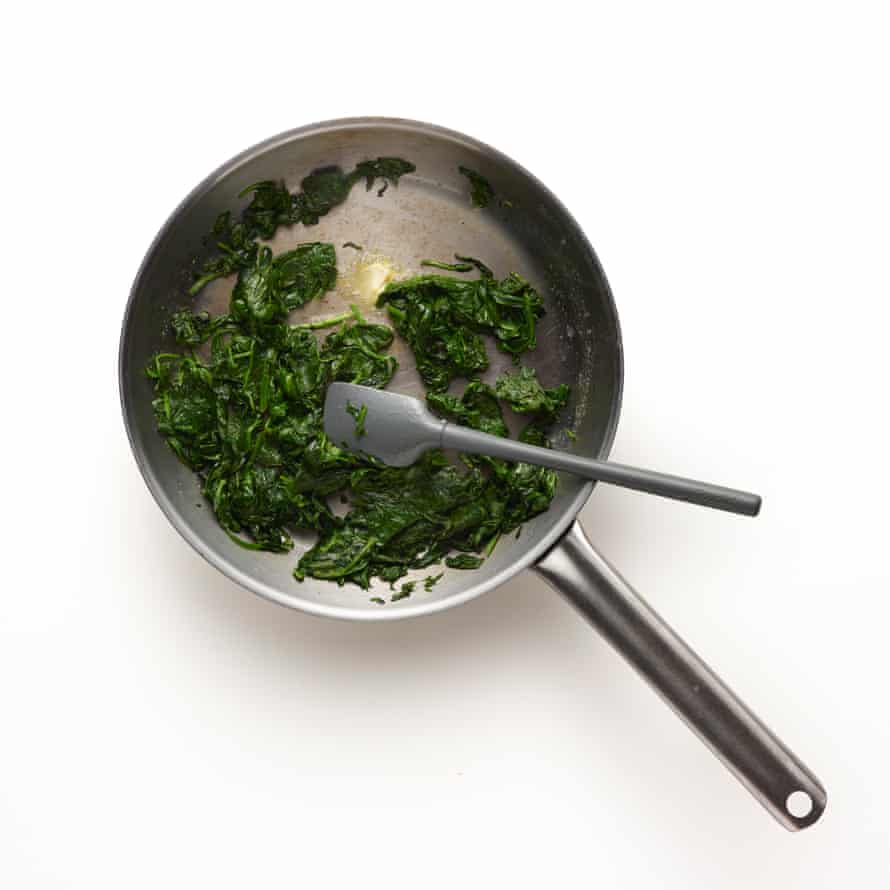 Heat the butter or oil in a frying pan over a medium heat, then add the garlic and cook, stirring, until fragrant. Stir in the drained, blanched spinach, fry, stirring, until it stops steaming, then leave to cool. 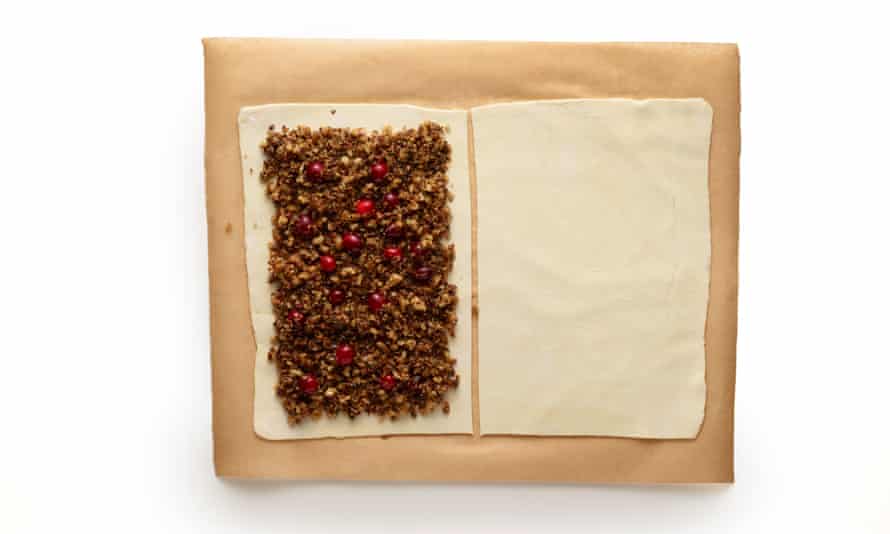 Put the pastry on a piece of greaseproof paper, roll out into a roughly 30cm x 40cm rectangle, then cut into two equal rectangles. Scoop most of the duxelles on to one half, leaving a 1cm border clear all around the edge, then arrange the spinach down the middle of the duxelles mix. Neatly lay the two pieces of squash on top of the spinach, then spoon a line of duxelles on top of the squash. 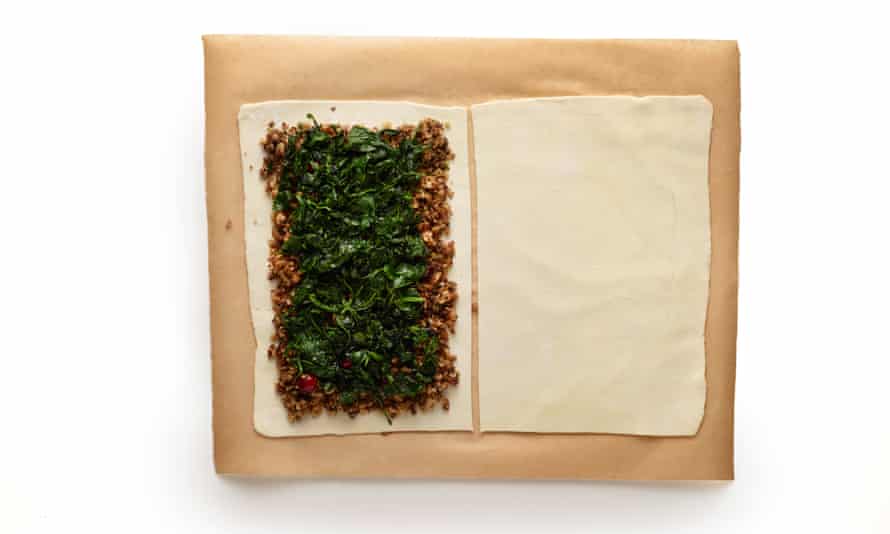 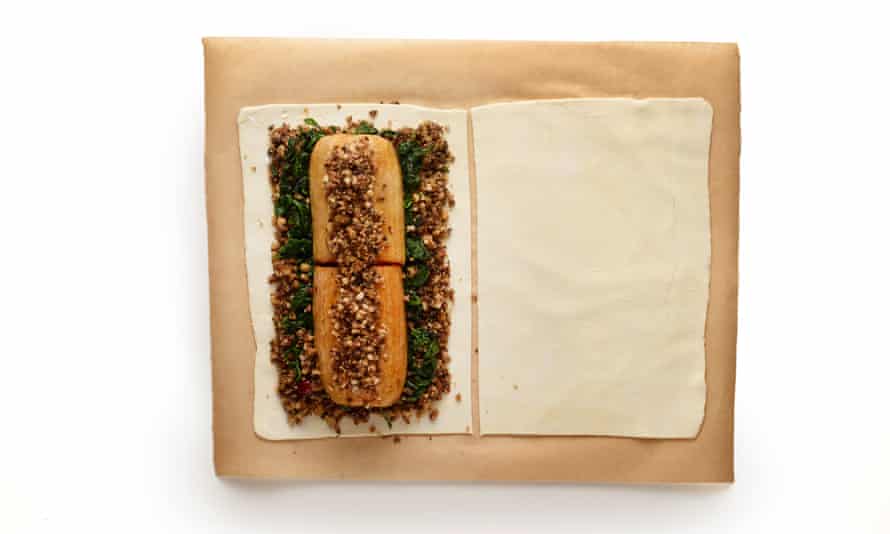 Roll out the second piece of pastry a little wider than the first, paint the edges with egg wash or milk, then lay it on top of the squash and press down on to the bottom piece of pastry to seal. Transfer the wellington to a lightly greased baking tray (at this point, you can chill the wellington for up to 24 hours, if you like). 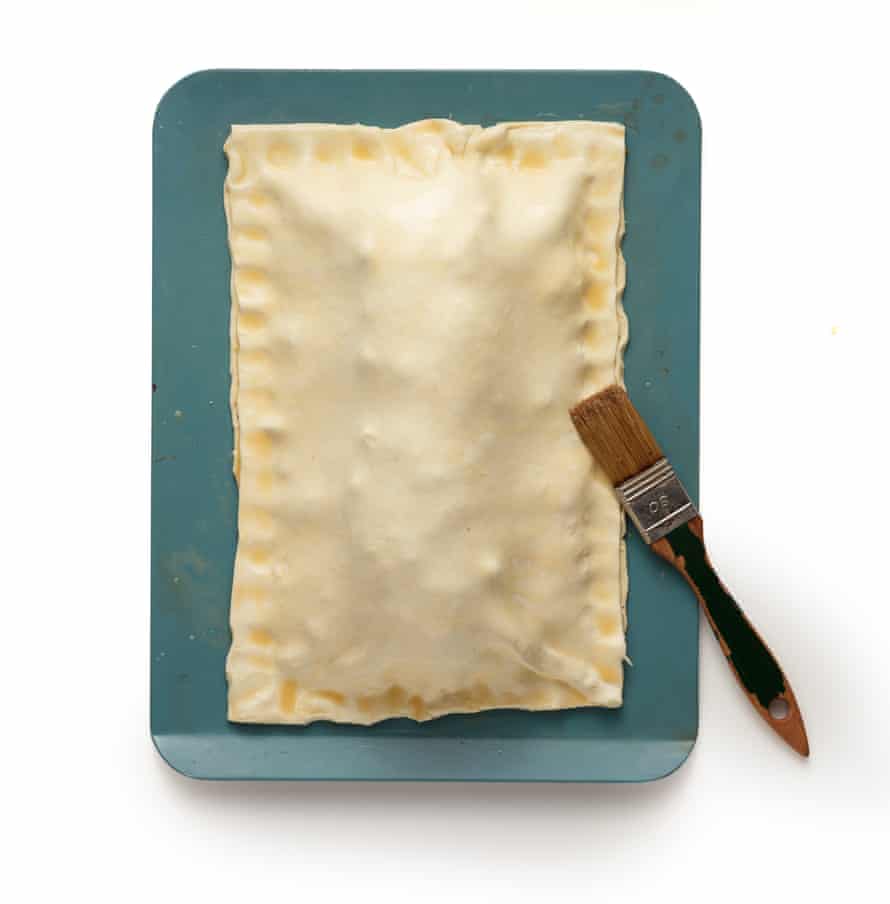 Heat the oven again to 200C (180C fan)/390F/gas 6. Brush the wellington all over with egg wash or plant milk, then bake for 40-50 minutes, until golden brown. Leave to cool slightly before slicing and serving with all the usual Christmas trimmings. 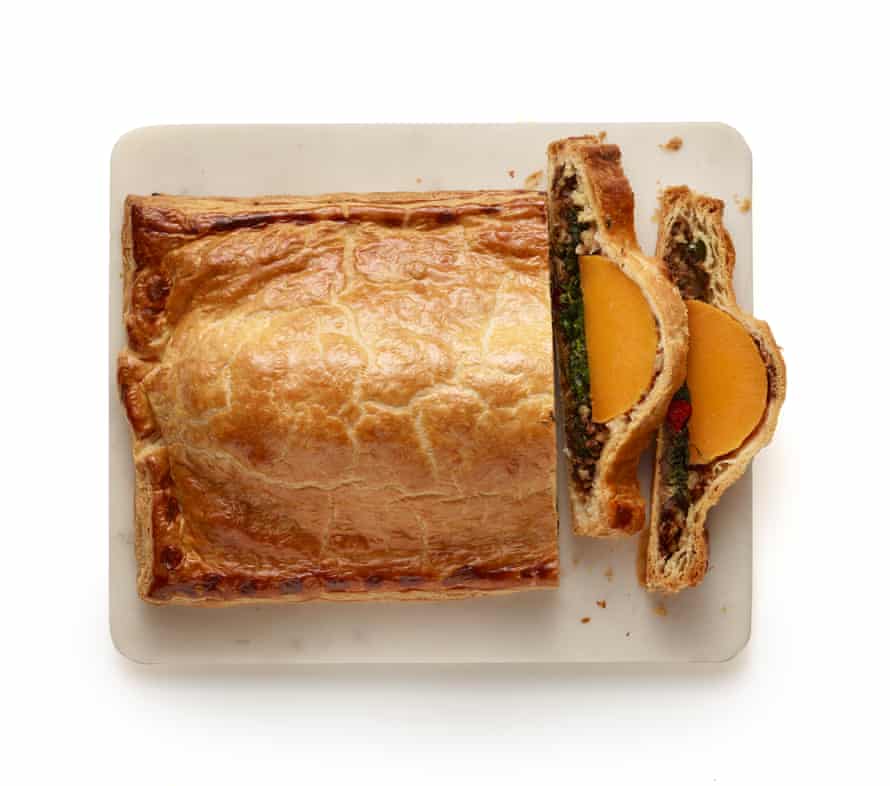