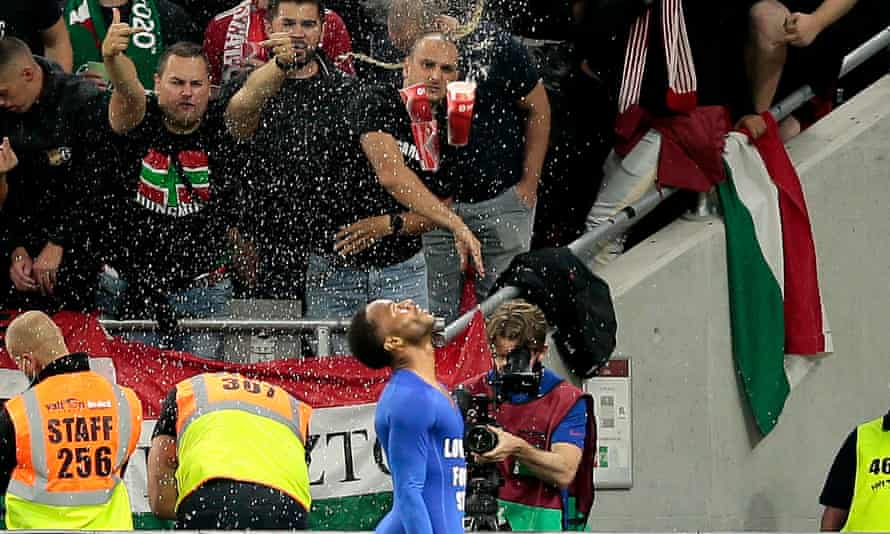 Hungary have already been ordered to play their next three home Uefa competition matches behind closed doors because of “discriminatory behaviour” by their supporters at Euro 2020, with one of those games suspended for two years, and they face further punishment after racist abuse marred their World Cup qualifier against Southgate’s side.

With the game under Fifa jurisdiction, a hostile crowd set out to make life difficult for England at a packed Puskas Arena. There were loud boos when England’s players took the knee before kick-off and the mood descended after Sterling put the Euro 2020 finalists ahead after 55 minutes. Missiles were aimed at players on several occasions, a flare was thrown on to the pitch and the night ended with Sterling and Bellingham being targeted with racial abuse.

Television cameras picked out at least one fan making a monkey gesture and Southgate, who said that the people abusing his players are dinosaurs, insisted that it is up to the authorities to be tough with Hungary.

“There’s no more this group of players or staff can do in the fight against racism,” England’s manager said. “Other people have got to take the right action to try and make progress.

“They shouldn’t have to be subjected to any form of racism. There’s a balance in the crowd. As we know at home not everybody causes problems. Tonight our anthem was really respected remarkably well.

“It’s not fair to criticise all the Hungarian fans. A lot were very generous and behaved extremely well. The individuals that are responsible need to be dealt with. I think there’s some evidence that people have been filmed and we’ve got to hope the authorities deal with that in the right way.”

England were booed by a section of their own supporters for taking the knee before friendlies against Romania and Austria at the Riverside Stadium in June. Southgate was asked whether last night’s abuse shows why his side have continued to perform the anti-racism gesture.

“They recognise the world is changing,” he said. “Although some people are stuck in their way of thinking and prejudices, they are going to be the dinosaurs in the end. The world is modernising. Hungary isn’t anywhere near as diverse as our population. It’s taken us a long time to get to where we need to get to. We’ll continue to try to set the right example for young people in our country.”

Boris Johnson, the prime minister, urged Fifa to take action in a tweet on Friday morning. “It is completely unacceptable that England players were racially abused in Hungary last night,” Johnson said. “I urge @FIFAcom to take strong action against those responsible to ensure that this kind of disgraceful behaviour is eradicated from the game for good.”

The Football Association has also asked Fifa to launch an investigation. “It is extremely disappointing to hear reports of discriminatory actions towards some of our England players,” the FA said. “We will be asking Fifa to investigate the matter. We continue to support the players and staff in our collective determination to highlight and tackle discrimination in all its forms.”

John Stones said England will not stop fighting discrimination. “It’s so sad to think that this happens at our games,” he said. “I hope whoever needs to take care of it does. I’m sure they will. We stand together as a team and we did do before the game. We’ll continue fighting for what we believe in as a team.”

The behaviour from the crowd took the focus away from a commanding performance from England, who maintained their perfect record in Group I thanks to goals from Sterling, Harry Kane, Harry Maguire and Declan Rice. “The players were excellent,” Southgate said. “We made what was a very difficult fixture very comfortable in the end.”