Five and a half years have passed since Carlos Brathwaite brought the last Twenty20 World Cup to the most extraordinary of conclusions, a period in which the format’s roots have strengthened, its canopy has flourished and its stars have blossomed.

In 2009, 49 officially sanctioned international T20s were played by 12 nations; in 2019, the year before the pandemic, there were 307 matches played by 71 nations, from Argentina to Zimbabwe via Pakistan, Portugal and Peru. A neat demonstration of its ubiquity is that during the first week of this tournament the process of qualifying for the next one – scheduled to begin in Australia in October 2022 – has been in full flow with regional tournaments in Spain and Rwanda.

Elite Twenty20 action has been coming at us in an unbroken wave, with the IPL concluding in Dubai last Friday and the World Cup starting in Oman less than 48 hours later. But there is no sense of appetites being sated, if anything the early stages of this competition have whetted them further. There is always a chance a tournament will prove disappointing, that it will lack upsets, moments of drama and demonstrations of pure skill. But that never looked likely this time, given that despite a couple of notable absences – Faf du Plessis, the evergreen 37-year-old who had a phenomenal IPL but was snubbed by South Africa, stands out – what has gathered in the United Arab Emirates is surely the greatest collection of practitioners of limited-overs cricket ever assembled.

Sure enough the first upset came on day one, when Scotland beat the Group B favourites, Bangladesh, and on day two Ireland overcame the Netherlands, another upset if not quite on the same scale, with Curtis Campher collecting four wickets in four balls. As tournament openings go, this was not so much a case of getting the ball rolling as sending it flying. The Scots then beat Papua New Guinea before confirming their progression on Thursday with victory over Oman – they will join India in Group Two, while Bangladesh accompany England in Group One.

On Saturday, the competition moves to another level, with the start of the Super 12s and the introduction of the world’s highest-ranked nations. The format has changed since 2016, with the old Super 10s, themselves an extended version of the pre-2012 Super 8s, expanding once again. What this means is more matches and thus less jeopardy: only once, and that was in 2010, has a side come through this stage having lost twice, but this time it is likely.

It is more sporting for consistency to be rewarded and for the latter stages to feature the finest teams, but this is a format defined by the speed and brutality with which defeat appears and attacks. There was something fitting about a tournament that reflected it.

India begin as heavy favourites, the depth of their resources so overwhelming that they could leave their two leading T20 wicket-takers of the past five years, Yuzvendra Chahal and Kuldeep Yadav, at home. Instead, they have placed their faith in the 22-year-old leg-spinner Rahul Chahar, who will have to thrive against Pakistan’s Mohammad Rizwan, who has scored more T20 international runs in 2021 than anyone in a year, and New Zealand’s Glenn Phillips, 2021’s leading T20 six-hitter. 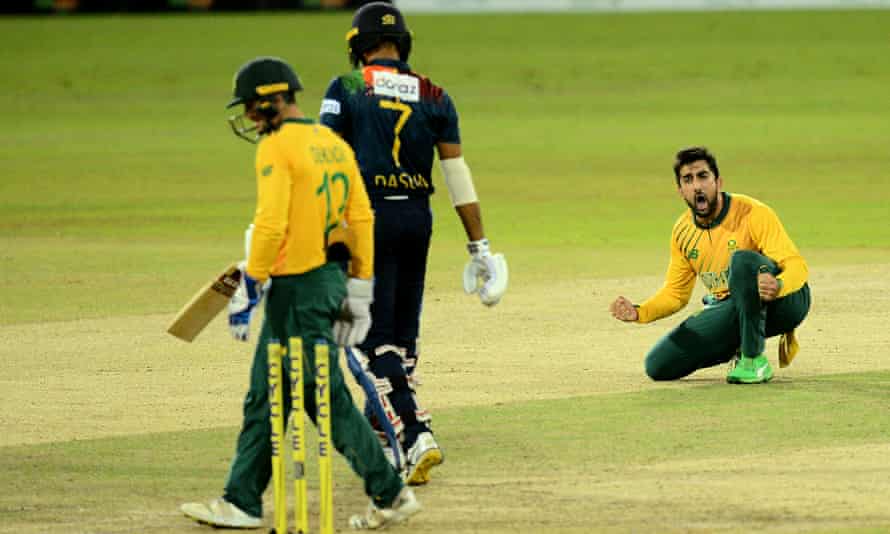 South Africa’s Tabraiz Shamsi is the No 1-ranked bowler in the world.

It would be a big surprise should India fail to progress from Group Two, but there is little else that can be predicted with any great certainty. Part of the fascination for this group is how Afghanistan get on after the upheaval they have suffered in their preparation.

West Indies, reigning champions and the only side to have won this competition more than once, look strong, with an experienced squad led by the explosive Kieron Pollard and featuring Chris Gayle, at 42, the oldest of the tournament’s three fortysomethings. For them to emerge from Group One at least two of England, Australia and South Africa must not.

After a couple of poor years the Proteas surf into the tournament in excellent form and have the world’s top-ranked bowler in Tabraiz Shamsi, a left-arm wrist-spinner who grew up wanting to be a magician and in the eyes of many batsmen appears to have become one.

England have been weakened by injuries to Ben Stokes and Jofra Archer but will hope their batting lineup is strong enough to make up for it, while Australia urgently need David Warner to recover from his dismal form – he has had four T20 innings since April, scoring three runs – if they are to win it for the first time.

One perennial cricketing problem that will not be an issue this year is rain, though there will be different meteorological aspects to deal with. Games start either at 2pm (11am BST) or 6pm local time, meaning players will either play in the full furnace of the UAE’s intense heat or in the evening, when the sun is less of a problem but dew becomes one. This will be particular concern for India and Pakistan, whose games start late to catch primetime viewing hours back home.