Embraced or pushed back: on the Polish border, sadly, not all refugees are welcome

At the train station in Przemyśl in Poland, thousands of refugees fleeing the Russian invasion of Ukraine get off the carriages every day, seeking asylum in Europe. As they arrive, dozens of Polish border guards and soldiers distribute food, water, blankets and hot tea with a smile.

I look on as the soldiers help Ukrainian women and children with their heavy luggage. I watch as they play with the children and caress their faces. As the scene unfolds, I can’t help but think that this is the same border force which, for months, a short distance north, along the same eastern border, has been violently pushing back asylum seekers from Syria, Iraq and Afghanistan who attempt to cross the frontier from Belarus.

It is the same border force which, instead of offering a caring touch and a comforting smile, brutally beat the refugees from Aleppo, who are also victims of Vladimir Putin’s bombardments. In Przemyśl, the Ukrainians are served hot drinks. At the Belarusian border, at least 19 migrants have died in the frigid forests.

Last winter, I covered for the Guardian the refugee crisis between Poland and Belarus, when the Belarusian president, Alexander Lukashenko, was accused of organising the movement of refugees, who were lured with the promise of safe passage to Europe, in reprisal for the sanctions Brussels had imposed on his regime.

Forgive me, but I cannot come to terms with the stark difference between the outpouring of kindness towards Ukrainian refugees and the uncertain fate of thousands of asylum seekers from the Middle East, trapped between the violence of the Polish authorities and false promises of the Belarusians.

I cannot hold back the rage I feel for the Yazidi families who fought against Islamic State, but who were being forced to live in small tents in the woods at the European border, struggling to keep warm in damp sleeping bags as night-time temperatures fall below zero. Forgive me if, in contrast with the hospitality shown to Ukrainian refugees, I cannot help but think of the Syrian and Kurdish men and women caught by Polish border guards and illegally and violently pushed back to Belarus.

As I’ve covered the exodus of Ukrainian refugees escaping the Russian invasion, I have noticed a growing number of people from Pakistan, Ghana, Morocco and Somalia, mainly students, who have just arrived at Przemyśl train station from cities in Ukraine. 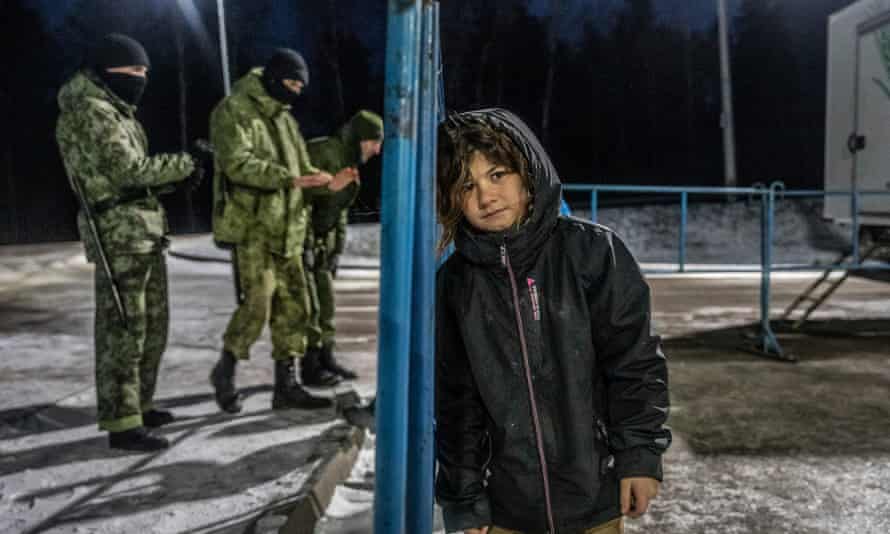 A little girl from Syria in Bruzgi, on the Belarusian border. Unlike those from Ukraine, most of the refugees from Middle Eastern and Asian countries late last year were pushed back by the Polish border guards. Photograph: Alessio Mamo/The Guardian

It is unclear whether the Polish authorities will allow them to stay. Some would like to go back to their home country but others fear being sent back.

On Tuesday, just 100 metres from my hotel, dozens of Polish nationalists, dressed in black, targeted these groups of non-white refugees, chanting “go back to your country”. Three Indians were beaten up, leaving one of them having to be taken to hospital.

After the incident, police in Poland warned that groups linked to the far right are already spreading false information about alleged crimes committed by people from Africa and the Middle East who are fleeing the violence in Ukraine.

Despite the well-intentioned pronouncements of the Polish police, who on this occasion sided with the Middle Eastern and African refugees, I can’t help but think that these are the same authorities who, months earlier, while facing the humanitarian crisis at the border with Belarus, spoke of the risk of a migrant invasion from the Middle East and mobilised their troops to push them back.

At that time, over four months the Middle Eastern asylum seekers attempting to enter Poland through Belarus numbered only a few thousand. If the tiny Italian island of Lampedusa welcomes up to 2,000 asylum seekers from Libya in a day, with political will Poland could have resolved the humanitarian crisis at the Belarusian border in a few days.

An average of 50,000 Ukrainian refugees are entering Poland every day, which so far has taken in more than 500,000 people: at this rate, it could face Europe’s largest wave of refugees since the second world war.

But while Warsaw regarded the arrival of a few thousand Syrian and Kurdish refugees as a significant political problem, the presence of more than half a million Ukrainians in their country seems to have become a badge of national pride for the Poles, who are now struggling to find space for them.

At the station in Przemyśl, as I watch a Polish policeman console a tearful and distraught Ukrainian woman, I think about the 32-year-old woman from Syria I met last December in a makeshift dormitory in Bruzgi, Belarus. Since fleeing Idlib, she had been held up in Belarus with her mother who’d had a kidney transplant and needed medical help.

I contemplate the different fate of two women who had both become victims of war: the Ukrainian who received a warm meal and a smile from the kind policeman and the other, a Syrian, who can only dream of receiving a fraction of that care and attention.