Severe damage to the China Eastern Airlines jet that crashed on Monday with 132 people on board means investigators face “a very high level of difficulty” in establishing a cause, authorities have said.

Zhu Tao, director of aviation safety at the Civil Aviation Administration of China (CAAC), said on Tuesday no survivors had yet been found by rescue workers who continue to search the mountainous, forested site where the Boeing 737-800 came down.

“The jet was seriously damaged during the crash, and investigations will face a very high level of difficulty,” Zhu said at the first government briefing on the disaster.

“Given the information currently available, we still do not have a clear assessment of the cause for the crash,” he said, adding that the aircraft did not respond to repeated calls from air controllers during its rapid descent.

The jet “met airworthiness standards before taking off and technical conditions were stable,” Sun Shiying, a China Eastern Airlines official, said at a briefing. “The crew members were in good health, and their flying experience was in line with regulatory requirements.”

Flight MU5735 was headed on Monday for the port city of Guangzhou from Kunming, capital of the south-western province of Yunnan, when it plunged from cruising altitude to crash in the mountains of Guangxi less than an hour before its scheduled landing time.

The jet appeared to dive to the ground at an angle of about 35 degrees from the vertical in video images from a vehicle’s dashboard camera, according to Chinese media. Reuters could not immediately verify the footage. 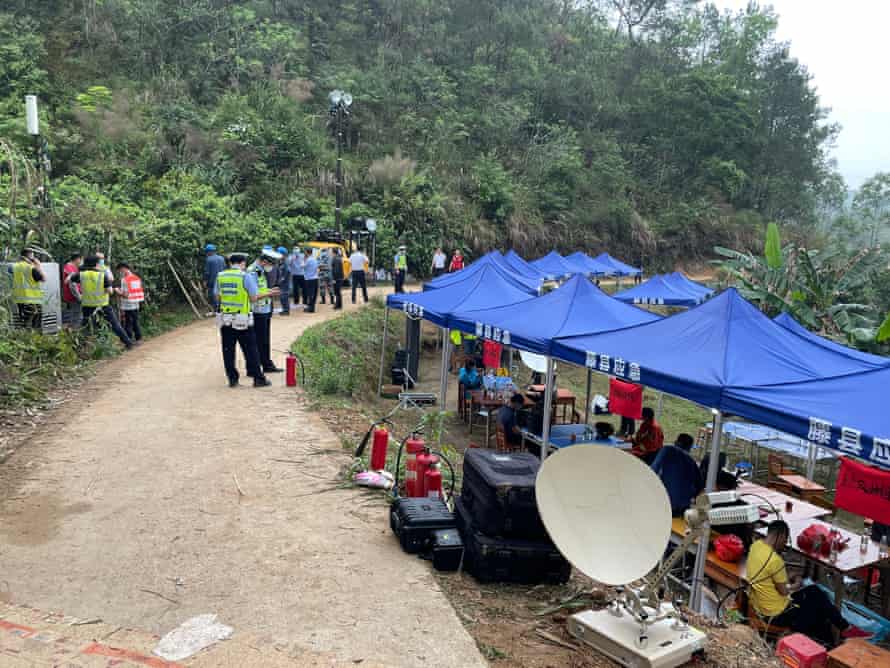 On Tuesday, rescuers combed heavily forested mountain slopes in southern China, using shovels and torches in their search for victims and flight recorders from the jet.

About 600 soldiers, firefighters and police marched to the crash site – which measures about 1 square kilometre in a location hemmed in by mountains on three sides – after excavators cleared a path, state media reported.

It added that the search for the data and voice recorders, or “black boxes”, of the Boeing 737-800 involved in China’s first crash of a commercial jetliner since 2010, would be carried out in grid-by-grid fashion.

Si, 64, a villager near the crash site who declined to give his first name, told Reuters he heard a “bang, bang” at the time of the crash. “It was like thunder,” he said.

State television has shown images of plane debris strewn among trees charred by fire. Burnt remains of identity cards and wallets were also seen. Rain is forecast in the area this week, potentially further hampering search and recovery efforts.

Police set up a checkpoint at Lu village, on the approach to the site, and barred journalists from entering. Several people gathered for a small Buddhist ceremony nearby to pray for the victims.

The last commercial jetliner to crash in China was in 2010, when an Embraer E-190 regional jet flown by Henan Airlines went down, killing 44 of the 96 aboard.

Highlighting the top-level concern, vice premier Liu He went to Guangxi on Monday night to oversee search and rescue operations. An official of the same rank was similarly sent to the site of the 2010 crash in north-east China.

The disaster comes as Boeing seeks to rebound from several crises, notably the impact of the coronavirus pandemic on air travel and safety concerns over its 737 Max model after two deadly crashes.

“Accidents that start at cruise altitude are usually caused by weather, deliberate sabotage, or pilot error,” Dan Elwell, a former head of US regulator the Federal Aviation Administration, told Reuters. Elwell, who led the FAA during the 737-Max crisis, said mechanical failures in modern commercial jets were rare at cruise altitude. 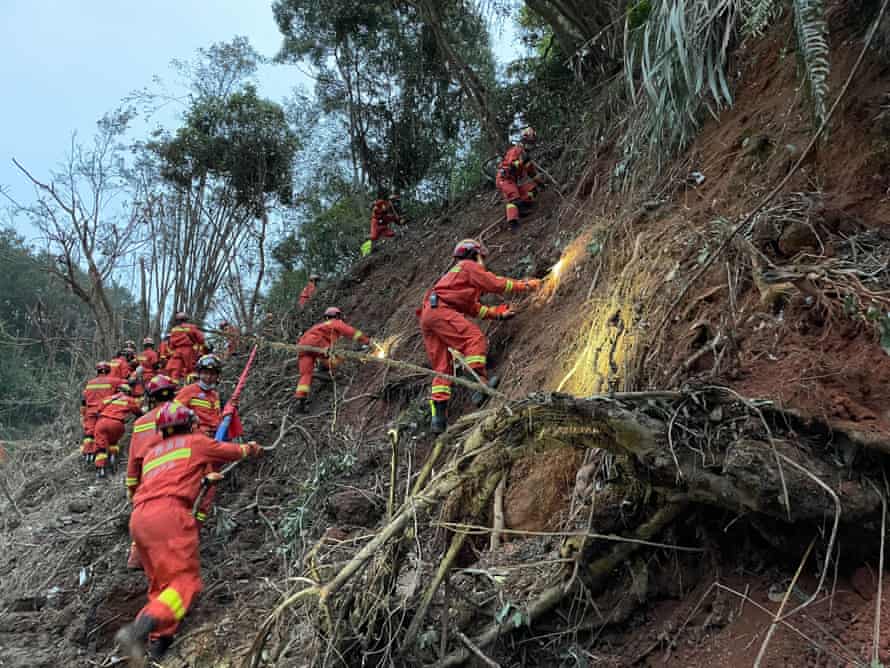 The passenger plane crashed with 132 people aboard in mountainous, forested terrain. Photograph: Xinhua/REX/Shutterstock

Chinese investigators are leading the inquiry because the crash took place there, but US authorities will provide aid because the plane was US-made.